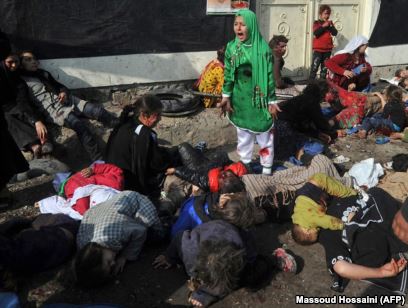 FILE — Tarana Akbari, 12, screams in fear moments after a suicide bomber detonated a bomb in a crowd at the Abul Fazel Shrine in Kabul, Dec. 06, 2011. Photographer Massoud Hossaini won a Pulitzer Award for this photo in 2012.

During its 20-year insurgency, the Taliban employed suicide bombers as a lethal tool to kill foreign and Afghan government troops and terrorize the civilian population.

Even now, as the Taliban attempts to transform from an insurgency into a government, its contingent of trained suicide bombers remains central to its military and political strategy, experts say.

In a victory parade after retaking power, the Taliban displayed its suicide bombers and arsenal of explosives-laden suicide vests. The parade triggered outrage among many Afghans who said Taliban suicide attacks had killed hundreds of civilians over the years.

The militants also announced the formation of a new “martyrdom brigade” made up of suicide bombers, in a move that experts say is an attempt to rebrand its suicide bombers as elite fighters ready to protect the new government.

“The current Taliban leadership seeks to retroactively take ownership of suicide bombing in all its forms and to give it a new meaning that will help it transform a decentralized insurgency into a unified government,” says David Edwards, a professor of anthropology at Williams College.

He says the new suicide bomber brigade is intended to “confer legitimacy on the Taliban leadership as it attempts to turn itself into a semblance of a government with regular troops under its command and not just covert agents of violence.”

Edwards also noted that the Taliban’s would-be suicide bombers were “members of elite cadres who parade in regimental order wearing colorful uniforms that showcase the different types of suicide bomber and their function.”

In October, the Taliban announced that it was deploying its “martyrdom brigade” along the border with Tajikistan. The move came amid tensions between the Taliban-led government and Dushanbe, which accused the group of monopolizing power.

Abdul Basit Badar, the head of the brigade, told RFE/RL’s Radio Azadi in October that the suicide bombers were “ready to defend our country at any cost.”

“This brigade is ready to be deployed to our borders whenever there is fighting or a threat on our borders,” he said, adding that his unit was equipped with U.S. and Russian-made weapons.

The Taliban’s acting interior minister, Sirajuddin Haqqani, held a gathering for the families of suicide bombers at a luxury hotel in Kabul last month. During the gathering, he lauded suicide bombers for their “sacrifice” and promised their families land and money.

Haqqani is head of the notorious Haqqani network, the lethal arm of the Taliban. The network is a U.S.-designated terrorist organization and Haqqani is among the FBI’s most-wanted fugitives.

Haqqani sought to defend the Taliban’s use of suicide bombers, saying that “without fighters seeking martyrdom, we will not be able to fight the infidels,” in reference to foreign forces and the former Afghan government.

Haqqani also revealed the religious justification that the Taliban has used to carry out suicide bombings.

Recalling how the Taliban conducted the January 2018 suicide attack on the Intercontinental Hotel that killed 40 people, Haqqani said the commander leading the assault “greeted me and swore that Prophet Muhammad is personally leading their operation.”

In response, some in the audience wept and many shouted “Allahu Akbar,” or “God is great.”

Edwards says the Taliban has “turned the tactic of suicide bombing into the centerpiece of its ideological messaging and the suicide vest itself into its central symbol.”

Sami Yousafzai, a veteran journalist who has reported on the Taliban since its emergence in the 1990s, says by praising suicide bombers the Taliban is alienating both the Afghans it hopes to rule and the international community it needs to fend off an economic and humanitarian crisis.

“Instead of trying to unite Afghans with a narrative of peace after claiming to have won the war, they want to bask in what they view as their glory and celebrate tactics such as suicide bombings that killed and maimed many Afghan civilians,” he says.

But Yousafzai says the Taliban is not united in using suicide bombers as a pillar of its political strategy.

“Glorifying suicide bombings is something even sane voices within the Taliban were keen to avoid because it is preventing them from gaining support at home and legitimacy abroad,” he says.

The Taliban’s all-male government is dominated by hard-line veterans and loyalists, many of whom are under UN and U.S. sanctions for their ties to terrorism. The Taliban-led government, which is almost exclusively made up of Pashtun clerics, has not been recognized by any country.

There has been infighting between Taliban hard-liners and more moderate figures, who are keen to gain international recognition and local legitimacy.

The Taliban is not the only group employing suicide bombers.

The rival Islamic State Khorasan Province (IS-K) extremist group, which has been waging an intensifying war with the Taliban, has conducted a series of deadly suicide bombings targeting the Shi’ite minority and the new government.

Afghans who had hoped that the Taliban takeover would spell an end to decades of war are now bracing for more violence, including suicide bombings.

On November 2, at least 19 people were killed, including a Taliban commander, and dozens more wounded in a gun and bomb assault on a military hospital in Kabul. IS militants claimed responsibility for the attack.

“We still have to live in fear of these attacks,” said Nasima, a former government worker.