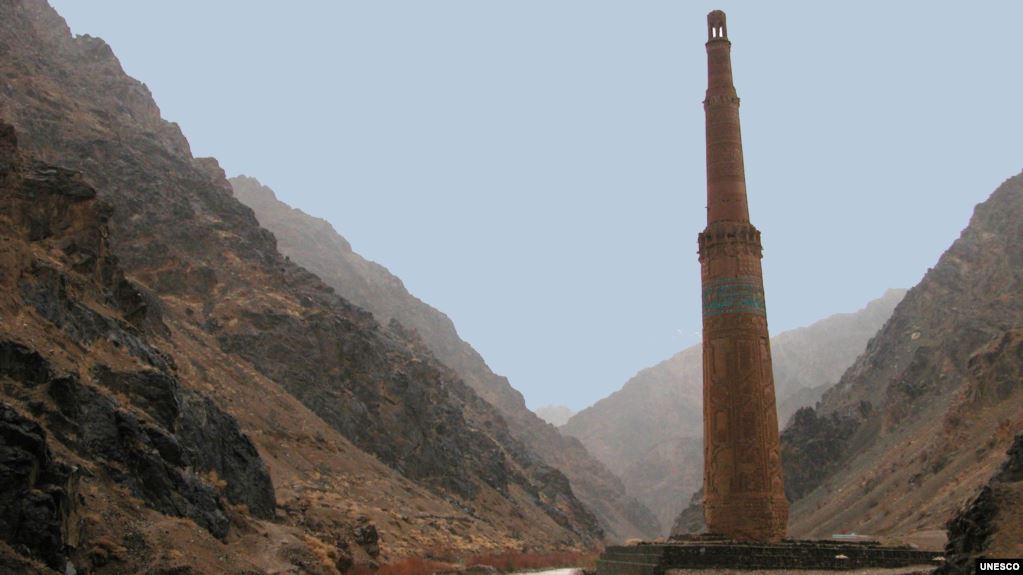 The Minaret of Jam, a UNESCO World Heritage Site, dates back to 1190. (file photo)

FEROZ KOH, Afghanistan — Centuries of neglect and frequent floods are threatening the Minaret of Jam, one of Afghanistan’s archaeological treasures.

Last week, the 800-year-old structure in the remote, western province of Ghor was left on the verge of collapse after a flood triggered by torrential rains. Muddy floodwaters inundated the archaeological site and smashed against the base of the minaret.

Located in a river valley flanked by soaring mountains, the tower was saved from imminent danger after the government deployed hundreds of workers, many barefoot and armed with shovels, who diverted the floodwaters.

But the UNESCO World Heritage Site dating back to 1190 remains in danger, this time from the Taliban, the fundamentalist group that has destroyed the country’s archaeological relics in the past.

Dozens of government troops and progovernment militiamen had been stationed in security checkpoints near the minaret to protect workers toiling to save the landmark.

On May 29, dozens of Taliban militants stormed and seized control of several of the checkpoints, cutting access to the historic site and killing at least 18 government security personnel.

Abdul Hamid Nataqi, a member of the provincial council, said the security personnel protecting the minaret were forced to flee after the Taliban attack.

“In order to prevent casualties to the workers and prevent damage to the minaret, the security forces left,” Nataqi told RFE/RL.

Nataqi also said work to protect the minaret from floods was halted as the workers were evacuated.

The Taliban’s control of the archaeological site has alarmed activists.

“The minaret is in grave danger,” said Mohammad Wazir Noorani, a cultural activist in Feroz Koh, the capital of Ghor Province. “If the government does not launch a serious attempt to seize back control of the area, the [archaeological] site could be in danger.”

“The security situation in the area is very worrying,” said Shah Mahmud Shoab, a civil activist in Feroz Koh. “The Minaret of Jam is under the control of the Taliban.”

Ghor, a mountainous and remote province in the central highlands, is one of the poorest and most unstable areas in the country.

The provincial government’s power extends little beyond Firoz Koh. Dozens of illegal, armed groups run by former warlords and militia leaders are active in Ghor, a key transit route for arms and drugs, and the resulting clashes are seen as the source of much of the violence in the province.

The leaning minaret is thought to be the world’s second tallest made of bricks, towering at a height of 65 meters. The tower is famous for its decorations and Islamic inscriptions.

The Minaret of Jam was built by the Ghurids, rulers who carved up an empire that consisted of modern-day Afghanistan, Iran, and parts of Central Asia, Pakistan, and India. The rulers converted from Buddhism to Islam in the 12th century.

Afghanistan has been plagued by decades of civil war and foreign invasions and the country’s antiquities and historic sites have suffered years of destruction and looting.

In 2001, the Taliban shocked the world when it demolished the ancient Buddhas of Bamiyan, in central Afghanistan, a testament to Afghanistan’s pre-Islamic history.

Over the course of three weeks in the spring of 2001, the militant group dynamited and shelled the 53-meter and 35-meter statues carved into the sandstone cliffs overlooking the Bamiyan Valley.

The militant group branded the 1,500-year-old Buddhist monuments as “idols” that Muslims had a duty to destroy.

In 1996, when the Taliban seized control of Kabul following a devastating civil war, militants rampaged through the National Museum and systematically destroyed scores of ancient relics.

Written by Frud Bezhan, based on reporting by Radio Free Afghanistan correspondent Qadir Ghafori in Ghor.