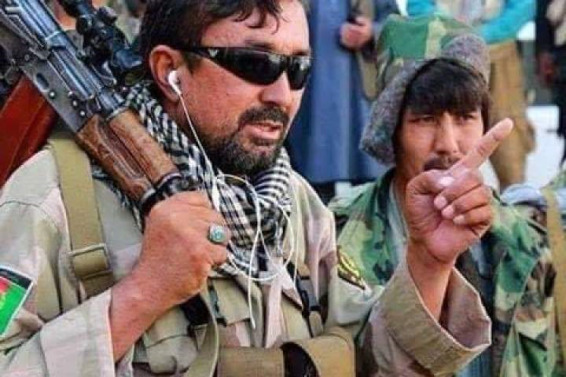 Afghanistan’s powerful former warlords are remobilizing their old militias in anticipation of what many expect to be a bloody new chapter in a decades-old conflict.

Armed groups loyal to regional and local strongmen have rearmed and reappeared in the country’s northern, western, and central regions in recent months. The former militias have vowed to defend against a possible Taliban takeover, although they have clashed with government forces in some areas.

The resurgence of the warlords comes amid waning confidence in the weak Afghan government and beleaguered Afghan security forces ahead of the complete withdrawal of foreign forces from Afghanistan by September.

There are fears that the return of the private militias — many organized along ethnic lines — could further undermine support for the Afghan government and drag Afghanistan back into the chaos of the 1990s.

During its brutal civil war from 1992 to 1996, Afghanistan descended into lawlessness as warlords and the Taliban carved up the country into fiefdoms. Rival ethnic militias fought pitched battles for control of Kabul, killing some 100,000 people and leaving the capital in tatters.

Ali Adili, a researcher at the Afghanistan Analysts Network, an independent think tank in Kabul, says the international military presence kept in check many of the country’s former strongmen, who received high-ranking roles within the government in a nod to national unity after the U.S.-led invasion in 2001.

But he says that could change after foreign troops leave.

“The possibility that these power brokers might fall back to unpredictable behavior cannot be ruled out,” says Adili. “Especially if the international military withdrawal is accompanied by international political disengagement from Afghanistan.”

Many Afghans fear the U.S. and NATO pullout will kill the sputtering peace process between the Afghan government and the Taliban, emboldening that militant group to retake the country by force.

Such a scenario could lead to the collapse of the Western-backed Afghan government and ignite a new civil war.

To assuage those fears, former warlords have vowed to protect their communities.

But many of these same notorious figures have been implicated in gross human rights abuses over the decades.

In a public show of force, Ismail Khan, one of Afghanistan’s most prominent former warlords, paraded hundreds of his militiamen at a rally in the western city of Herat on April 18.

Armed with assault rifles, the  militiamen chanted, “Allahu Akbar,” or “God is great,” as Khan vowed to “defend the people of Herat.”

“We hope for a real peace,” Khan says, calling on the Taliban to negotiate an end to the war. “But if there isn’t one, people shouldn’t worry. We will defend their honor and dignity. We won’t let anyone trample on them.”

Khan, an ethnic Tajik, claimed hundreds of “armed mujahedin” had been deployed in all districts of Herat Province, of which Herat city is the capital. The Taliban, a predominately Pashtun group, controls large swaths of the countryside around the city.

Many of the country’s former warlords, including Khan, are ex-commanders of the mujahedin, the Western-backed Islamist groups that fought the Soviet Army in Afghanistan in the 1980s and later the Taliban.

Khan warned the government, which he described as “incompetent,” that there would be a “reaction” if it tried to disarm the “mujahedin,” employing a term loaded with symbolism by the role that such Islamic fighters’ played in the Soviet-Afghan War especially.

Khan’s comments came just days after Zulfiqar Omid, a Hazara activist and politician, on April 13 announced the creation of a “resistance front” in the province of Daikundi, in central Afghanistan.

In a Facebook post, Omid said the militia had been formed to “fight against injustice and discrimination” and provide security in Daikundi, a relatively peace province that has been recently hit by militant attacks. The fighters are led by Mohammad Ali Sadaqat, a mujahedin-era commander.

In photos accompanying his post, Omid is seen walking through a column of militiamen brandishing AK-47 Kalashnikov rifles.

In an interview with RFE/RL, Omid says he supports peace efforts with the Taliban. But he says it is unclear what a postwar Afghanistan will look like under the current peace process.

“Our people don’t feel safe,” Omid says in reference to the Shi’ite Hazara minority. “They are worried. Over the past 20 years, we have been the target of terrorists.”

Dasht-e Barchi, a predominately Hazara neighborhood in Kabul, has been the scene of a string of gruesome attacks by the Taliban and Islamic State (IS) militants who have killed hundreds in recent years.

Soldiers, police officers, and even armed, plainclothes civilians — paid and trained by the government — patrol the neighborhood. There have been growing calls for the community, where suspicion of the government is rife and anger is widespread, to take its security into its own hands.

Outside of the capital, militants have kidnapped and executed Hazara civilians and stormed Hazara areas in attacks that have forced thousands to flee their homes.

During their oppressive rule throughout the late ’90s, the Taliban terrorized the Hazara, wrestling control of Hazara regions in Afghanistan through a campaign of targeted killings and what rights groups have suggested amounted to ethnic cleansing.

In the nearby province of Maidan Wardak, a Hazara militia led by Abdul Ghani Alipur, a local warlord, has been engaged in deadly clashes with government forces for months.

In January, the militia fought government forces over control of Behsud district, one of Alipur’s strongholds. When the government appointed a new police chief in the district, the decision triggered protests during which troops fired on demonstrators, killing 11.

In March, an Afghan military helicopter was downed in the area, killing nine security personnel. The government blamed Alipur’s militia and launched a manhunt for him, although he has yet to be apprehended.

The government has accused Alipur’s 300-strong militia of conducting criminal activities, including extortion, in the guise of fighting the Taliban. Alipur, known as Commander Sword, has said he is simply protecting Hazaras from the Taliban.

Despite the accusations against him, Alipur has enjoyed the support of powerful Hazara leaders and remains popular with the community, which has been embittered by what many see as government inaction in the face of deadly militant attacks against the minority group.

“For several years now, we have been witnessing the killing of our loved ones by the Taliban,” says Sharifa Ahmadi. She says her husband, a civil rights activist, was stopped and shot dead by the Taliban in September 2018 along a highway in the Jalrez district of Maidan Wardak.

“Alipur is someone who fights against terrorists and defends his people,” says the widowed 27-year-old. “Why does the government not support him and sends troops to arrest him?”

Gulbuddin Hekmatyar, one of Afghanistan’s most notorious ex-warlords and a former militant leader, has staged several rallies in Kabul in recent months.

Hundreds of his supporters have taken to the streets of the capital to demand the resignation of the government and the establishment of a transitional authority to oversee the peace process.

Hekmatyar’s armed supporters have also rallied in the provinces. Hundreds of men toting rifles and hoisting flags protested in the northeastern province of Badakhshan on April 13.

Hekmatyar’s party claimed that in the absence of government forces his armed fighters were able to secure the province’s Baharak district from the Taliban.

Hekmatyar’s Hezb-e Islami militant group signed a controversial peace deal with the government in 2016. The 72-year-old, a Pashtun, has since taken over the leadership of the Hezb-e Islami political party.

The reappearance of Hekmatyar’s armed supporters has fueled fear that the radical Islamist could violently lash out if his interests are harmed in the peace process.

Adili of the Afghanistan Analysts Network says there are several reasons why ethnic militias are rearming and reappearing.

“Certain communities will rely on these figures for protection in a scenario in which the peace process falls apart and the state apparatus breaks down,” he says.

“Ethnic communities also want to maximize their leverage — either in negotiations over a peace settlement or on the battlefield if the Taliban attempts a military takeover of the country.”

There is a precedent for rearming militias in Afghanistan, where the government has used them to fend off the Taliban.

With support from the Afghan Interior Ministry, U.S. forces trained and armed the Afghan Local Police (ALP), an 18,000-strong force of pro-government village militias spread across the country.

Earlier in the war, the United States spent millions on a Disarmament, Demobilization, and Reintegration (DDR) program for the country’s former warlords. But a decade later, Washington changed course and rearmed many of the same militias.

The government-sponsored militias were intended to provide security in remote villages across rural Afghanistan where the Taliban-led insurgency were strongest. The force proved successful in some areas but were accused of human rights abuses in other areas.

In theory, these local militias were meant to come under the command of the existing Afghan national security forces hierarchy. But in reality, their allegiances lay with local warlords.

Funding for the ALP ended in September 2020. Parts of the force are expected to be disbanded. The majority are planned to be incorporated into the Afghan police force and national army.

Even if the ALP is disbanded, the government is still bankrolling local militias out of growing desperation to curb a resurgent Taliban.

Observers say the biggest concern about pro-government militias is the strain they could impose on the institutional coherence of the Afghan security forces. That strain, observers say, could lead to the crumbling of the government forces along factional, tribal, and ethnic lines.

That was the case in the early 1990s, when such a fragmentation precipitated the fall of the communist Afghan government and led to civil war.

Rahmatullah Amiri, a Kabul-based political analyst, says progovernment militias can stop the Taliban from making gains in the short-term. But he says the same militias will become a liability for the government in the future.

“There are many spoilers who will take advantage of militias,” he says. “It will lead to enormous human right abuses as we have already experienced in the past. The government’s legitimacy will be further called into question.”