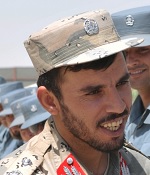 Afghanistan’s Taliban rulers declared a general amnesty for their former foes who fought them for two decades as part of the Western-backed Afghan government.

But supporters of a late Afghan general say they have been under relentless Taliban persecution for the more than 14 months since the Taliban seized power.

The Taliban denies any revenge targeting of Raziq’s supporters or members of the Achakzai tribe.

But tribal members say Taliban persecution has continued since the seizure of Spin Boldak, a border town and Achakzai stronghold in Kandahar, a month before the Taliban seizure of Kabul on August 15, 2021.

“Afghanistan is hell for the supporters of the late General Abdul Raziq,” Akhtar Mohammad Khan Badezai told RFE/RL. The exiled former Afghan presidential adviser speaks to the media on behalf of Raziq’s family.

“People are being killed merely for carrying a photo of General Raziq,” he says.

Badezai claims some 4,000 of Raziq’s supporters, including women and children, have been killed in Taliban reprisals. He adds that thousands more have forcefully disappeared or remain in Taliban captivity.

“Those killed and persecuted were not only members of the Achakzai tribe but members of other Pashtun tribes and even ethnic Tajiks and Uzbeks,” he says.

When pressed about the evidence of the persecution and killings, he cited the names of a few prominent Achakzai figures who were killed after the Taliban takeover and claimed that the Taliban has killed some 50 former members of the Afghan security forces in eastern Nangarhar Province because they had served under Raziq.

He says a list is now being compiled of all the alleged victims killed, tortured, and forcefully disappeared by the Taliban.

“The Taliban amnesty is a lie,” he says. “There is no province in Afghanistan where our people have not been martyred.”

Mohammad Naeem Lalai Hamidzai, a former Kandahar lawmaker, also claimed extensive persecution by the Taliban. He told RFE/RL that the Taliban systematically targeted the estimated 18,000 members of the Spin Boldak border force and Kandahar police that Raziq led until he was killed in 2018.

Hamidzai alleged that more than 300 members of the two forces were killed during the first days of the Taliban takeover.

“These people are well known. They were all members of our tribe,” he said, referring to the Achakzais. An estimated 500,000 members straddle Kandahar and the southwestern Pakistani province of Balochistan. Most Achakzais are traders benefiting from vital trade and smuggling routes crisscrossing their homeland.

In a report released in November 2021, the global rights watchdog Human Rights Watch (HRW) documented some killings and disappearances of former members of security forces in Kandahar.

“The Taliban summarily executed some former security force members in front of their families,” the report said. “Others who were well known for fighting against the Taliban are among those forcibly disappeared.”

Hamidzai said that the Taliban also detained up to 1,800 alleged supporters of Raziq, many of whom remain missing, even after the Taliban released more than 700 of them.

“This persecution that began during the Taliban takeover 14 months ago still continues,” he said, claiming that targeted assassinations extend into Balochistan, where the Achakzai live near a strategic pass connecting Spin Boldak to the provincial capital, Quetta.

On October 11, the Pakistani English-language daily Dawn reported the assassination of Abdul Samad Achakzai in Quetta. He was a former police commander in Kandahar’s Panjwai district and reportedly a close confidant and relative of Raziq.

For many years, Quetta and other Balochistan districts were the scenes of tit-for-tat killings in which Raziq targeted fugitive Taliban figures who retaliated by targeting members of his Adozai clan. Adozai are one of the several Achakzai clans straddling the border between Afghanistan and Pakistan.

Raziq’s influence grew because of his reputation as a formidable Taliban foe. He joined the anti-Taliban forces in late 2001. In subsequent years, he became the powerful commander of a border force.

In 2011, Raziq was made Kandahar police chief. His influence in Kabul and his Western allies made him the most powerful Afghan military figure in southern Afghanistan.

In 2017, HRW called him “Kandahar’s torturer in chief.” After multiple failed assassination attempts against him, he was killed in an insider attack in October 2018.

Hamidzai alleges that the Taliban have seized his house, the properties of Raziq, and other assets of Achakzai members.

He says the Achakzais now want to avoid reigniting a tribal feud with Nurzai, a rival Pashtun tribe. Some Nurzai members are now senior Taliban leaders in Kandahar. Achakzai leaders and others in Kandahar accuse them of turning the crackdown on Raziq’s supporters into a tribal vendetta. The two tribes have engaged in a century-old tribal feud that has claimed hundreds of lives.

“There is an effort to light a fire that will keep on burning for a long time,” he says, alluding to disputes among Pashtun tribes that go on for generations.

Hamidzai says that delegations of Achakzai tribal leaders have repeatedly petitioned Taliban leaders in Kandahar and Kabul to seek an end to their persecution. But these efforts, he adds, have failed.

Taliban spokesman Zabihullah Mujahid rejected the charges that the Taliban is engaged in widespread, ongoing atrocities against Raziq’s supporters or the Achakzai tribe.

But he did acknowledge that in the days following the Taliban’s seizure of Kandahar in July and August 2021, a few of Raziq’s supporters were killed in retaliation for his alleged atrocities.

“The atrocities Raziq had committed had prompted personal feuds and rivalries, which resulted in the killing of six or seven of his supporters,” he told RFE/RL’s Radio Azadi. “But the Islamic emirate acted swiftly and arrested the culprits while warning others that violators of our general amnesty will face severe consequences.”

In September, the Taliban said it was investigating a mass grave in Spin Boldak where the remains of 12 people were discovered. Taliban officials claimed the victims were killed in 2012 when Raziq was Kandahar’s police chief. Raziq’s supporters deny the mass grave is filled with his alleged victims. They claimed that the mass graves are from the time of the Soviet occupation of Afghanistan in the 1980s.

Patricia Gossman, an associate Asia director for HRW, said the organization is unable to probe all of the alleged abuses by the Taliban in Kandahar. But she says the militant group is determined to crush any sources of resistance and has also let its forces carry out vendettas.

“The two motives come together in this case,” she said, adding that the Taliban fears any lingering support for Raziq’s forces. “They want to punish those who supported him or who might want to revive armed resistance.”