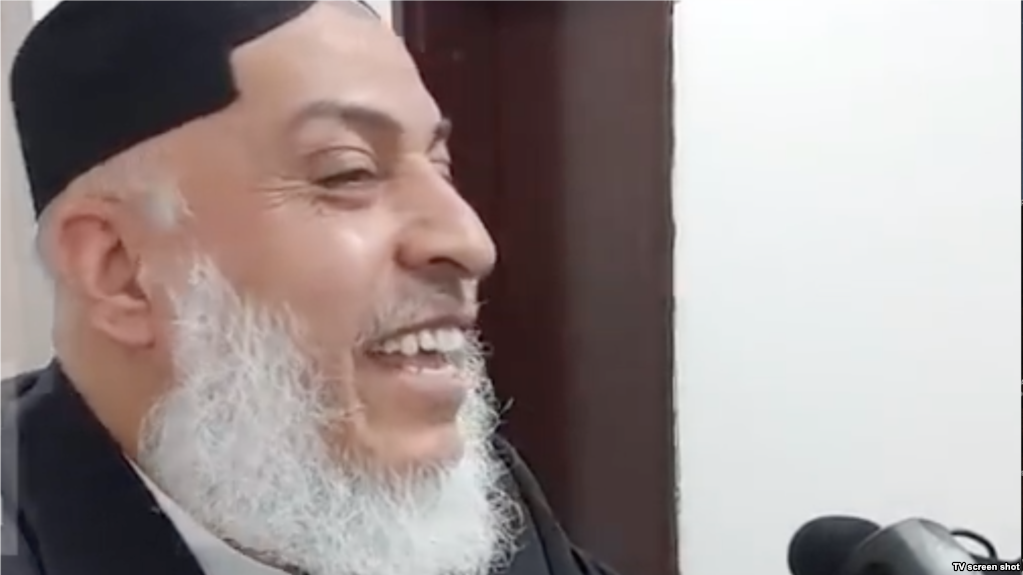 FILE – Taliban chief negotiator Sher Mohammad Abbas Stanekzai is seen delivering a speech at an “internal gathering” in Doha, Qatar, April 28, 2019, in a screen grab taken from video. (Screen grab by A. Gul)

ISLAMABAD — The Taliban’s chief negotiator says in newly released remarks that the United States is on the verge of defeat and will quit Afghanistan soon “either of their own accord, or they will be forced out.”

Sher Mohammad Abbas Stanekzai made the assertions in an April 28 speech to an “internal gathering” in Doha, Qatar, just two days before he led his team of insurgent negotiators into fresh talks with U.S. interlocutors. Pro-Taliban social media outlets Friday released video of Stanekzai’s speech, one day after the U.S. special reconciliation envoy, Zalmay Khalilzad, and his team wrapped up the week-long negotiations with Taliban representatives in the Qatari capital.

In the speech, Stanekzai praised what he called the bravery of the Afghan nation for defeating past British and Soviet invasions of their country and resisting the current foreign military presence, referring to the U.S.-led coalition, which is training and advising pro-government forces in battles against the Taliban.

“God has helped us defeat three super powers in the last century. The third super power that we are currently confronted with is also on the verge of defeat, inshallah (God willing). You will soon hear they also will withdraw (from Afghanistan) either of their own accord or they will be forced out,” Stanekzai told the gathering.

On Saturday, former U.S. Defense Chief Robert Gates said there is a “real risk” that if American troops withdraw from Afghanistan before the Afghan government is stable, the Taliban might retake control of the country.

Gates told CBS News that the Afghan insurgent group still wants to rule over the country. “The question is, can you negotiate an arrangement whereby the Taliban agrees to operate under the Afghan Constitution, becomes a part of the political process?” Gates, who served as the secretary of defense under President Barack Obama from 2006 to 2011, spoke after the U.S. announced it was transferring $1.5 billion designated for the war in Afghanistan to build a border wall.

U.S. Special Representative for Afghan Reconciliation Zalmay Khalilzad last week tweeted that the sides are making “steady but slow progress on aspects of the framework for ending the Afghan war.” He said, however, that the current pace of talks isn’t sufficient “when so much conflict rages and innocent people die.”

“We need more and faster progress. Our proposal for all sides to reduce violence also remains on the table,” he said.

Stanekzai criticized Afghan President Ashraf Ghani and compared him as well as other pro-government leaders with those who had supported Moscow during the Soviet occupation of Afghanistan in the 1980s.

“The ill-fated Ghani did not participate in the jihad (holy resistance) against Russians but he still takes credit and says, ‘I am an Afghan and we defeated Russians,'” Stanekzai said, taking note that Ghani lived outside Afghanistan throughout the Russian occupation of the country. Ghani returned to Kabul after the U.S.-led military coalition ousted the Taliban from power in 2001 for sheltering the al-Qaida network.

“You will see that tomorrow when, God willing, Americans are defeated the same Ashraf Ghani and the same [former president Hamid] Karzai, who are their [US] stooges and were brought to power, they will again take pride in claiming we are Afghans and we defeated the Americans,” said the Taliban chief negotiator.

No mention of past CIA support

Stanekzai did not mention Washington’s support for the anti-Soviet Afghan resistance in his nearly hour-long speech.

The Central Intelligence Agency funded training camps that were set up in neighboring Pakistan for Afghan Mujahideen who were waging resistance against Soviet forces. The CIA also supplied modern weapons, including heat-seeking U.S. stinger missiles, assistance that observers believe played a crucial role in forcing Moscow to withdraw from Afghanistan.

The ongoing peace dialogue between Washington and the Taliban started nearly one year ago and both sides say they have prepared a preliminary draft agreement. The proposed document exclusively focuses on how and when U.S. troops will withdraw from Afghanistan in return for assurances the Taliban will not allow transnational terrorists to use Afghan soil for attacks against other countries.

Ambassador Khalilzad, however, has linked a final agreement to a comprehensive cease-fire by the Taliban and the insurgent group’s participation in an intra-Afghan dialogue to permanently end decades of hostilities. The Afghan government has been excluded from the talks, a move that has angered Ghani.

The Taliban want Washington to agree to and announce a withdrawal plan. The insurgent group says it will reject cease-fire calls and formal intra-Afghan peace talks until all foreign troops leave the country. The insurgents have dismissed the Afghan government as a product of an “American occupation” and say that the administration has no decision-making authority.