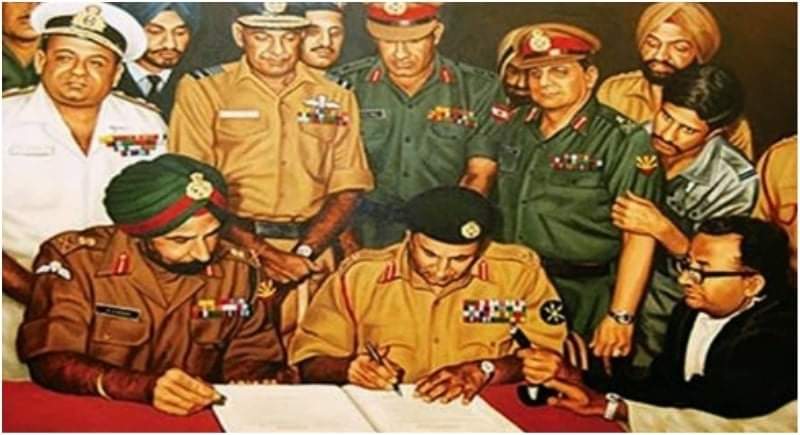 A war of words between Pakistan and Afghanistan has escalated dramatically on social media and reverberated up the political ranks, threatening a diplomatic breakdown and highlighting security concerns in the region.

An Afghan vice president taunted Pakistanis on July 22 with an image from a humiliating national defeat a half-century ago and accused “thousands of Pakistani activists” of celebrating Taliban militants’ recent gains in Afghanistan.

The public drama follows Kabul’s accusations that Pakistan’s military is protecting Taliban fighters who are furiously battling Afghan government forces as international troops withdraw — a charge that Pakistan has rejected.

It also follows both sides’ withdrawal of their ambassadors after an allegation that the daughter of the Afghan envoy to Islamabad was abducted last week and “tortured” before being released, although Pakistani officials have rejected that account.

Afghan Vice President Amrullah Saleh posted a historical photo of Pakistan surrendering what is now Bangladesh to end the Indo-Pakistani War of 1971, vowing that “we don’t have such a picture in our history and won’t ever have.”

Pakistani national-security adviser Moeed Yusuf in turn accused senior Afghan officials of “embarrassing” their country with “idiotic statements” and “vitriolic and delusional statements” intended to divert attention “from their own failures.”

Yusuf insisted Pakistan was “committed” to encouraging an inclusive political settlement in Afghanistan.

Afghanistan has long accused Pakistan of supporting armed Taliban elements, and the United States in 2018 suspended military aid to Islamabad amid reports of frustration that Pakistan was providing safe havens for fighters and cross-border attacks.

Pakistani authorities pledged to fully investigate the alleged kidnapping of Afghan Ambassador Najib Alikhil’s daughter while she was riding in a taxi in Islamabad on July 16. But Pakistani Interior Minister Sheikh Rashid said that after reviewing closed-circuit footage and searching 200 taxi cabs the authorities concluded “There is no case of kidnapping.”

Pakistani and Afghan officials have sparred publicly for decades over the ongoing threat from cross-border violence by Pakistani-based Taliban and other militants.

Saleh last week accused Pakistan’s air force of radioing a threat to Afghan warplanes “trying to conduct an air strike on the Taliban and their Pakistani militias,” in the words of a spokesman.

Rezwan Murad, the spokesman for Saleh, told RFE/RL’s Radio Azadi on July 16 that the threats in question were “recorded voices and the messages are saved.”

After Saleh taunted Pakistan with the 1971 image of surrender to pro-Bangladeshi militants on July 22, Pakistani Information Minister Fawad Chaudhry responded bluntly via Twitter.

“Afghanistan belongs to brave people of Afghanistan unlike hyena’s [sic] like you, a bunch of you have little interest in Afghanistan or even this region you are just a scavenger will fly to safe heavens when the time [will] be up,” Chaudhry tweeted.

Meanwhile, the Taliban has waged major offensives all over the country and taken control of sparsely populated districts, including areas on Afghanistan’s borders with Tajikistan, Turkmenistan, and Uzbekistan.

He said his country “will be most affected by turmoil in Afghanistan,” adding, “The last thing Pakistan wants is more conflict.”

Khan also suggested that waiting to negotiate seriously with the Taliban until after international troops’ withdrawal was announced was a mistake.

“[W]hy would they listen to us when they are sensing victory?” Khan asked.

« Reporter’s Notebook: When the Taliban First Came to Kabul
Tajikistan Says It’s Ready To Shelter Up To 100,000 Refugees From Afghanistan »