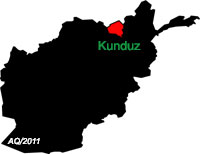 The clash, according to the spokesman, erupted in Alafbirdy area early Thursday and have left five militants and a local dead.

Taliban militants who are active in parts of Kunduz province are yet to make comment.