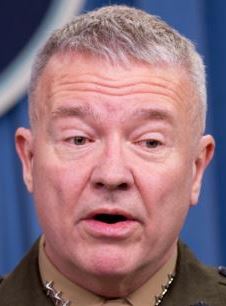 Seligman: Why did they collapse? We spent so long training the Afghans and then as soon as we were gone, they fell. How did that happen?

McKenzie: I believe the proximate defeat mechanism was the Doha negotiations [on a peace deal]. I believe that the Afghan government began to believe we were getting ready to leave. As a result, I think it took a lot of the will to fight out them.

Seligman: Do you blame the Trump administration for what happened?

McKenzie: It goes even back beyond that. You can go back to the very beginning of the campaign, when we had an opportunity to get Osama bin Laden in 2001, 2002 and we didn’t do that. The fact that we never satisfactorily solved the problem of safe havens in Pakistan for the Taliban. There are so many things over the 20-year period that contributed to it.

But yes, I believe that the straw that broke the camel’s back and brought it to the conclusion that we saw was the Doha process and the agreements that were reached there.