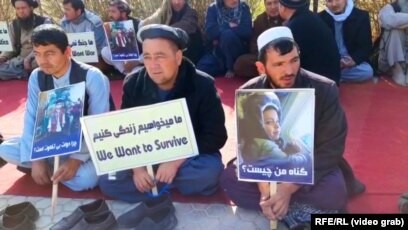 Members of Afghanistan’s Turkmen minority have protested for the recovery of 9-year-old Abdul Rauf, who was abducted four months ago. (file photo)

The abduction of a child in northern Afghanistan has shocked the country’s Turkmen minority. It has prompted members of the community to shut the country’s northern river ports and border crossings with its Central Asian neighbors and hold protests both in Afghanistan and elsewhere in the four months following the abduction.

Last week Abdul Nabi, the father of Abdul Rauf, 9, arrived in Kabul with a group of relatives. They were invited by the National Directorate for Security (NDS), the Afghan spy service, for more than 10 days of meetings with officials about his son’s release, which has yet to be secured despite promises by top officials.

Even the Taliban has made attempts to recover Nabi’s son by allowing him to meet with a group of suspects who admitted to participating in the kidnapping or hosting the kidnappers.

Still, Nabi is waiting to bring his son home. The kidnappers are now demanding a ransom of $2.2 million for Rauf’s release and have sent Nabi numerous videos of his son being tortured. Some of the videos have been widely viewed on Afghan social media.

“If we see that you are not going to accept our demands, we will commit such atrocities against your child that not even Ganges Khan would have conceived of,” one of the latest WhatsApp messages from his kidnappers warned Nabi. “You will also see the video of what we are going to do to him,” read the message, which he shared with Radio Free Afghanistan.

Nabi has pleaded with the Afghan government for President Ashraf Ghani to intervene. “It has been more than 100 days since Rauf’s abduction, and yet we are no closer to finding him,” he told Radio Free Afghanistan.

He says his son was abducted soon after he left for school with his 12-year-old sister, Gozel, on November 1. The family lives in Mazar-e Sharif, the capital of Balkh Province and the biggest city in northern Afghanistan.

The family learned of the abduction minutes after it happened when their daughter came running home. Nabi immediately reported the incident to the local office of the NDS. But he says the Afghan authorities failed to take sufficient action.

“I could monitor his GPS watch from my smart phone, and it was working for a full 12 days after his abduction, but no one was able to pinpoint his location,” he told 1TV, a private Afghan news station. “I don’t know what their motive is, but they are increasing the price for his release.”

Nabi, a middle-class trader in Mazar-e Sharif, says he doesn’t have the money but is prepared to give up everything he has to secure his son’s release.

News of his situation and debates on social media have prompted fellow Turkmens to protest for Rauf’s release. In late February, scores of Turkmen protesters forced the closure of the Aqina, Shir Khan Bandar, and Hairatan border crossings and river ports with Turkmenistan, Uzbekistan, and Tajikistan. Members of Afghanistan’s estimated 1 million Turkmens, most of whom are associated with the carpet industry, have also organized social media campaigns and street protests in Afghan cities and in front of their country’s embassy in Washington, D.C.

“The government is answerable to this nation because these people are also part of the nation and have voted in elections,” Nabi told a large February 7 protest in Mazar-e Sharif. “If Ashraf Ghani is the president of our republic, he must hear my voice, he must hear the voice of these people who have voted for him.”

But Ahmad Zia Siraj, Afghanistan’s current spy chief, says they are doing their best to reunite Rauf with his family.

“It is a very complex case,” he told journalists last week. “We have so far carried out 29 operations and sweeps of 26 places,” he added. “We are using all our resources to resolve this case.”

In January, Ghani warned security officials in Balkh that he would fire them if they fail to find Abdul Rauf. With the clock ticking on, the nightmare continues for Rauf, his family, and their community.