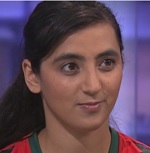 A group of top Afghan girls soccer players, their coaches, and family members have fled across the border into neighboring Pakistan as questions linger over the status of female athletes under the newly installed Taliban-led government.

“I am so happy to announce that today, more than 79 youth female football team players and their family members managed to get out of Afghanistan safely,” Khalida Popalzai, former captain of the Afghan women’s national team and founder and director of the Denmark-based Girl Power nongovernmental organization, wrote on Facebook.

According to Sardar Naveed Haider, an ambassador of the London-based NGO Football for Peace, the players included members of the under-14, under-16, and under-18 national teams who crossed the border dressed in burqas covering their whole bodies.

Dozens of members of the Afghan women’s national soccer team and family members were evacuated to Australia in August as tens of thousands of Afghans, fearing reprisal attacks and repression, fled the country after the Taliban toppled the Western-backed government in Kabul.

Pakistan’s Dawn newspaper reported that they had been issued emergency humanitarian visas.

The group traveled to the southern city of Lahore after crossing the border, AFP reported, adding that the players are expected to stay in Pakistan for a month before moving on to another country.

About 30 other female players were still hoping to cross into Pakistan, according to the news agency.

When the Taliban imposed its brutal rule on Afghanistan from 1996 to 2001, girls were not allowed to attend school and women were banned from work, education, and sports.

The hard-line Islamist group has suggested it is now more moderate, including in its attitude toward women and girls.

But many Afghans remain deeply fearful, especially after the militants formed an all-male government led by hard-line Taliban veterans, banned protests, and cracked down on demonstrators and journalists.

Afghanistan’s new rulers have indicated that women and girls will face restrictions in playing sport, with a senior Taliban official saying last week it was “not necessary” for women to play sports.

But on September 15, Bashir Ahmad Rustamzai, a sports official in the Taliban-led administration, said top-level leaders of the group were still deciding.