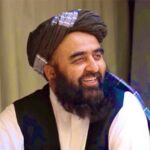 Afghanistan’s Taliban rulers have warned U.S. and European envoys that continuing to use sanctions as a means to put pressure on the militant group would trigger a new wave of economic refugees.

The acting foreign minister of the Taliban government, Amir Khan Muttaqi, told Western diplomats at talks in Qatar that “weakening the Afghan government is not in the interest of anyone because its negative effects will directly affect the world in (the) security sector and economic migration from the country,” according to a statement published late on October 13.

The United States and the European Union have said they are ready to provide humanitarian assistance to Afghanistan but want guarantees the Taliban will respect human rights, in particular those of women.

The Taliban toppled the Western-backed Afghan government in August following a blitz offensive across the war-wracked country amid the withdrawal of U.S.-led foreign forces that put an end to the two-decade-long conflict.

Afghanistan’s economy is in free fall with most aid cut off as winter nears, food prices rising, and unemployment spiking.

“We urge world countries to end existing sanctions and let banks operate normally so that charity groups, organizations, and the government can pay salaries to their staff with their own reserves and international financial assistance,” Muttaqi told the Doha meeting according to a statement by his spokesperson.

The EU during its first talks with the Taliban in Doha announced an expanded support package for Afghanistan and its neighbors worth about 1 billion euros ($1.15 billion).

Brussels hopes that donating money to help stabilize Afghanistan and assist countries around it could prevent a repeat of Europe’s 2015 migration crisis, when more than 1 million people fleeing war and poverty in the Middle East arrived in the bloc.

But European Commission President Ursula von der Leyen stressed that it would be used to help Afghanistan’s neighbors or given in “direct support” to the Afghan people, bypassing the Taliban government.

“We have been clear about our conditions for any engagement with the Afghan authorities, including on the respect of human rights,” she said on October 12.

With reporting by AFP and Reuters

« Drugs Funded The Taliban Insurgency, But Money For Afghan Rehab Centers Has Dried Up
Tolo News in Dari – October 13, 2021 »