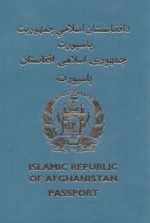 Since taking power last year, the Taliban have issued more than 700,000 passports to Afghan nationals inside the country, earning about $50 million in revenue, according to officials.

“We are issuing up to 4,000 passports daily and we aim to increase the number to 10,000,” Shirshah Quraishi, deputy director of Afghanistan’s passport department, told reporters Tuesday in Kabul.

Fearing the Taliban’s repressive rule, with many enduring hunger and poverty since their return to power, hundreds of thousands of Afghans have fled the country over the past year.

The U.S. government, which evacuated more than 120,000 Afghans last year, plans to resettle thousands of additional Afghans to the U.S. through the Special Immigration Visa and Priority-2 programs.

About half a million Afghans are estimated to have left their country in the months immediately after the Taliban’s takeover, according to the U.N. refugee agency.

While the Taliban have banned women from work, except in the health and education sectors, and have closed secondary schools for girls, passports have been issued both for male and female applicants, a Taliban official said.

The Taliban leadership also made more than $1 million in visa fees paid by more than 4,100 foreign nationals who have visited Afghanistan over the past year.

Passport and visa income is a small portion in the Taliban’s budget of about $2 billion for 2022 that reportedly is incurring a $500 million deficit.

Foreign donors have stopped all nonhumanitarian aid to Afghanistan following the Taliban’s takeover of the country, contributing to massive unemployment, heightened poverty and a widespread humanitarian crisis. Afghanistan received $4.2 billion in developmental assistance in 2020.

While some observers say that the Taliban have tackled corruption, particularly in revenue-generating sectors such as customs, getting a new passport remains mired in bribery and administrative corruption.

“I paid $800 in bribes and illicit commissions to get a passport,” said Farzana, an Afghan woman who has applied for a U.S. visa in Pakistan and preferred not to use her surname in this article.

Two other Afghans who recently got their passports in Kabul gave similar accounts of outright graft in the process.

Even Taliban officials acknowledge the corruption.

To meet the high demand from Afghans who want to leave the country, Taliban authorities have finalized plans to print 2 million new passport booklets.

Lacking the print technology inside the country, the Taliban have sought assistance from the U.N. to produce the new passports in Lithuania, officials said.

A spokesperson for the U.N. Assistance Mission in Afghanistan was not available to answer questions about helping the Taliban print new Afghan passports abroad.

“The new passports will carry the logo of the republic,” said Quraishi, referring to the former Afghan government.

More than a year since the collapse of the former Afghan government, no country has officially recognized the Taliban’s Islamic emirate, which has annulled the Afghan constitution and changed the national flag, emblem and other official logos.

Afghanistan’s passport is ranked the least powerful travel document in the world by the 2022 Henley Passport Index, facilitating entry to no country without a visa.

« Senior Clerics Caught In The Crossfire Of The Taliban’s Intensifying War With IS-K
Over 23 Million ‘Immoral’ Websites Blocked in Afghanistan: Minister »