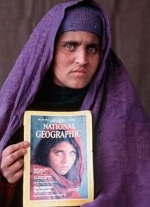 Pakistan has delayed the planned deportation of an Afghan woman whose 1985 photograph on the cover of National Geographic magazine became a symbol of her country during war in the 1980s.

Sharbat Gula, known as the green-eyed “Afghan Girl,” was facing deportation from Pakistan on November 7 after being arrested for living in the country on fraudulent identity papers.

Now in her 40s with four children, Gula has been hospitalized for most of the time since her arrest in Peshawar in October.

The Afghan Consulate in Peshawar said on November 7 that Afghan diplomats had convinced Pakistani authorities to allow her to remain in the hospital until November 9.

She is then to be transferred to Afghan border authorities at Torkham and flown to Kabul where Afghan President Ashraf Ghani plans to host a function in her honor.

Ghani’s office has announced that a house has been arranged in Kabul for Gula and her children to live.

Based on reporting by RFE/RL’s Radio Mashaal, Reuters, and Dawn