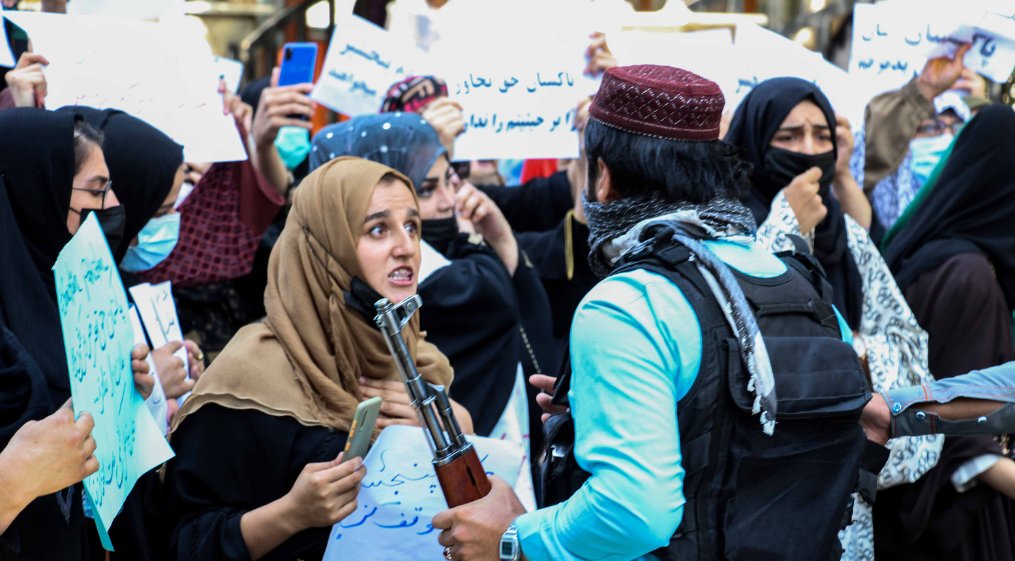 Protesters have returned to the streets in different parts of Afghanistan amid growing concern over the direction of the new government led by hard-line Taliban veterans after the militants outlawed protests “for the time being” and indicated women may be banned from participating in sports.

Three weeks after reclaiming power, the Taliban on September 7 named an all-male government for the “Islamic Emirate of Afghanistan” that is dominated by veteran militants vowing a return to strict Shari’a law, in a stark blow to Afghan and international hopes that the Taliban’s second reign will prove less restrictive than two decades ago.

The government installed by the Taliban on its first working day outlawed protests “for the time being under any circumstances,” saying demonstrators “disturbed the civil order and caused harassment.”

Defying pressure to stay at home, dozens of demonstrators chanting slogans such as “We want freedom” gathered near the Pakistan Embassy on September 9 before militants fired several rounds into the air to disperse the crowd, protesters said.

Demonstrations also were held in Parwan, Nimruz, Kunduz, and Kapisa provinces, where in some cases violence and arrests were reported. Further details were not immediately available.

Taliban gunmen have already cracked down on some of the protesters, and journalists covering the demonstrations, since the group effectively took control of the country in mid-August when the internationally backed government crumbled.

The United States and its partners have put the Taliban government on notice that international legitimacy will have to be “earned” after the group’s brutal rule between 1996 and 2001.

A U.S.-led virtual meeting with more than 20 partner states on September 8 explored ways to prod the group to avoid major rights infringements, avoid the persecution women and girls, and fulfill a promise of “inclusive” rule.

The meeting was co-chaired by U.S. Secretary of State Antony Blinken, who tweeted late on September 8 that the ministerial meeting showed “strong unity in making clear we will expect the Taliban to live up to their public commitments on inclusivity, safe passage, human rights, and combatting terrorism.”

That appeared to do little to deter the deputy head of the Taliban’s cultural commission, who said on September 9 that he doesn’t “think” women will be allowed to play cricket — a popular sport in Afghanistan — “because it is not necessary that women should play cricket.”

“In cricket, they might face a situation where their face and body will not be covered. Islam does not allow women to be seen like this,” Ahmadullah Wasiq told Australian broadcaster SBS News.

Meanwhile, China pledged $31 million worth of aid to Afghanistan, including food supplies, coronavirus vaccines, and medicine, as Beijing said it was ready to maintain communication with the Taliban government.

Alison Davidian, a representative for UN Women in Afghanistan, said in a video conference with journalists that already “every day we were receiving reports of rollbacks on women’s rights.”

She cited examples of women being “prohibited from leaving the house without a mahram,” or male escort from her family and, “in some provinces they [are] stopped from going to work.”

When the Taliban last ruled Afghanistan two decades ago, girls were not allowed to attend school and women were banned from work and education.

In his interview with SBS News, Wasiq said the Taliban had “fought for our religion so that Islam is to be followed. We will not cross Islamic values even if it carries opposite reactions. We will not leave our Islamic rules.”

“It is the media era, and there will be photos and videos, and then people watch it. Islam and the Islamic Emirate do not allow women to play cricket or play the kind of sports where they get exposed.”

In response to Wasiq’s comments, the global governing body for cricket expressed concerns for the future of the women’s game in Afghanistan, and said the matter will be discussed during its board’s next meeting in October.

The International Cricket Council (ICC) “is committed to the long-term growth of women’s cricket and despite the cultural and religious challenges in Afghanistan, steady progress had been made in this area since Afghanistan’s admission as a full member in 2017,” it said in a statement.

The Taliban is also being watched by many Western nations over its pledge to allow people to freely move in an out of the country.

U.S. and Qatari officials say as many as 200 Americans and other foreigners still in Afghanistan will fly out of the country from Kabul later on September 9 in what would be the first large-scale evacuation of Americans from the capital since international troops completed their withdrawal on August 31.

The AP quoted two Qatari officials as saying they expect 100 to 150 Americans to fly out from Kabul’s airport in the late afternoon or early evening, while a source in Doha, the Qatari capital, told Reuters that 200 non-Afghans would fly from Kabul on charter flights at some point during the day.

The AP sources said the Americans would leave on a Qatari flight that had delivered humanitarian aid to Afghanistan earlier on September 9. They spoke on condition of anonymity because they were not authorized to brief the media.

The U.S. and Qatari officials did not say whether those people were among the hundreds who have been stranded for days in the northern city of Mazar-e Sharif because their private charters have not been allowed to depart.

The Taliban has said it would allow passengers with valid travel documents to leave but that many of those at the northern airport did not have such papers.

Ahead of the U.S. military pullout, the United States and NATO allies evacuated tens of thousands of foreigners and Afghans at risk of Taliban reprisals from Kabul.

However, more than 100 Americans, and possibly hundreds, were said to remain, along with tens of thousands of others thought to want to leave.

An unidentified NATO military official told the dpa news agency that around 300 troops from the alliance’s Response Force had been deployed at various sites where evacuees are being hosted in Europe where they await resettlement.

Some 2,000 Afghans working with NATO or their families were evacuated last month, and “are in the process of being resettled in allied countries, including in the United States,” the alliance said earlier this week.

With reporting by AFP, dpa, SBS, Reuters, and the BBC