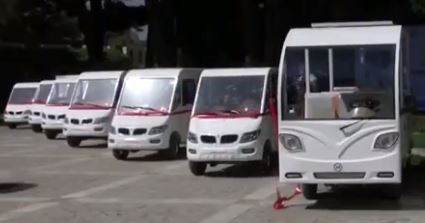 A Kabul-based company this week unveiled a fleet of locally made solar- and battery-powered passenger vehicles, as well as hybrid and conventional gas-powered cars and trucks, designed to give Afghans an alternative to imports.

At a ceremony Wednesday in the Afghan capital, Amin Noor Industrial Companies introduced 11 vehicle models ranging in price between $1,200 and $2,500 (USD). They include several electric vehicles, charged by solar energy.

A spokesperson from the company said that the goal is to open a new market for the cars in Afghanistan, which heavily relies on imported and mostly secondhand Japanese and Canadian models.

Amin Noor company manager Ahmad Zia Ahmadyar said it took three years to produce 80% of the vehicle parts. The company still imports parts for the engines, tires and glass for windows but hopes to produce those itself in the next five to 10 years.

The company has not established a production goal, but the spokesman said the plan is to manufacture vehicles according to orders. Company officials are discussing the sale of up to 30 vehicles to the Afghan presidential palace, but the hope is to expand to other Afghan government ministries before making them available to the general public.