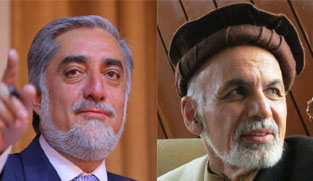 Confusion reigned early on March 9 over the parallel inaugurations planned by Afghanistan’s rival claimants to the presidency after challenger Abdullah Abdullah’s spokesman said he was postponing his ceremony.

Shah Hussain Murtazavi, a member of Ghani’s team, told Reuters following the Abdullah statement that nothing had changed and that Ghani’s inauguration was going ahead as scheduled.

“The arrival of guests has just started and we will have our ceremony in a few hours,” Murtazavi said.

Maisam said Abudullah’s decision was made following the intervention of Zalmay Khalilzad, the U.S. special envoy for Afghanistan.

It was not immediately clear what Abdullah would do if Ghani did not postpone his inauguration.

The dispute over the presidency has left Kabul’s allies and ordinary Afghan deeply worried about the future of the country as it tries to strike a peace deal with Taliban militants. Washington previously asked both sides to delay the ceremonies.

In February, after months of delay, Afghanistan’s Independent Election Commission announced that Ghani had been reelected with just over 50 percent of the first-round vote.

Afghan election officials said Abdullah finished in second place with just over 39 percent of the vote.

But Abdullah, alleging widespread fraud during the vote count, insists that he won the election and has vowed to form his own government.

Political analyst Atta Noori told AFP that the dispute would “gravely affect the government’s position in the upcoming intra-Afghan talks.”

“Unity is the only way [forward] if they want to win on the negotiating table,” he said.

Before the last-minute statements, talks reportedly were under way to reach a deal to avoid a damaging political standoff, but Ghani and Abdullah have until now shown no willingness to compromise.

The Taliban, meanwhile, had earlier said talks scheduled this week with Afghanistan’s government are unlikely to take place on time because of the two rivals’ plans to conduct the parallel ceremonies.

Widespread allegations of fraud in Afghanistan’s 2014 presidential election led to a political crisis between the top candidates, also Ghani and Abdullah.

That crisis was resolved by a U.S.-brokered power-sharing agreement that created a fragile national unity government.

Under that deal, Ghani became president while a new office of chief executive officer was created for Abdullah.

One thought on “Confusion Reigns Over Afghanistan’s Parallel Presidential Inaugurations”