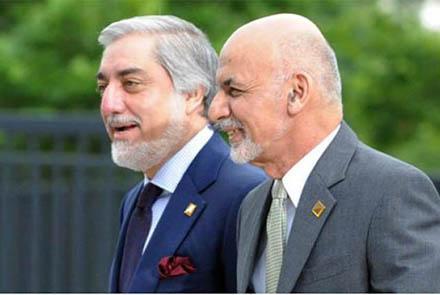 Both ceremonies were initially delayed, apparently to allow for hectic U.S. diplomacy to resolve the crisis.  However, after several hours the inaugurations began.

Ghani was the first to take the oath, in a ceremony shown live, where among other foreign guests were U.S. envoy Zalmay Khalilzad and U.S. commander of international forces Scott Miller.

Abdullah also was sworn in in a ceremony in his office, with both ceremonies broadcast live by all afghan television stations, some showing the two on split screens.

But Abdullah, the incumbent chief executive, rejected the outcome as fraudulent, claiming that he and his team had won the vote and threatened to form his own government.

Monday Abdullah tweeted his determination to move forward:  “No one should have underestimated our commitment to genuine democracy & our resolve to uphold rule of law. Our track record of self-denial & compromise should not have given cause to anyone to take us for granted. Invalidation of all fraudulent votes is the way out!”

Ghani and Abdullah both have come under sharp criticism from Afghan politicians and public who have taken to social media to express their outrage. “

This mockery of a dignified and brutalized nation by a handful is weakening Afghanistan,” tweeted Hekmat Khalil Karzai, former Afghan deputy foreign minister.“

Their actions are an insult to those who have made the ultimate sacrifice defending our nation. Afghanistan needs to be shielded from those responsible for this tragic comedy,” lamented Karzai, currently chairman of the Center for Conflict and Peace Studies (CAPS) in Kabul.

The political turmoil poses a serious challenge to a landmark deal the United States signed with the Taliban insurgency a week ago to help bring stability to Afghanistan.

The agreement signed February 29 in Qatar requires the Taliban to open negotiations with an inclusive Afghan delegation of political forces and civil society, and negotiate a permanent cease-fire.

The intra-Afghan talks are to begin Tuesday, but the inauguration crisis, analysts say, is likely to hamper efforts aimed at forming a united Afghan delegation to engage in talks with the Taliban.

Both Ghani and his traditional rival Abdullah also had claimed victories in the 2014 fraud-marred presidential election, leading to months of political chaos in the country.

Washington’s intervention at the time had settled the dispute under a deal that allowed Ghani to become the president and Abdullah to head a newly formed office of the chief executive of the outgoing so-called national unity government of Afghanistan that was plagued by deep political rivalries and controversies throughout its tenure.