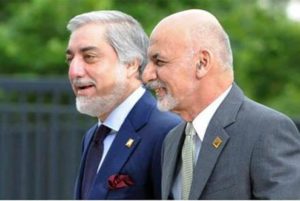 The Afghan Foreign Ministry has summoned the United Nations (UN) special representative for Afghanistan to protest his meeting with Abdullah Abdullah, a former official and a rival to incumbent President Ashraf Ghani.

Abdullah has contested the official results of the recent presidential election in Afghanistan, which Ghani won. On Monday, Ghani and Abdullah both held inauguration ceremonies in the capital, Kabul.

The ministry said in a tweet that Deputy and Acting Foreign Minister Mohammad Haroon Chakhansuri on Friday “reminded Mr. Yamamoto that the electoral process has reached its end and in accordance with the constitution” of Afghanistan.

According to the ministry, Yamamoto stressed during the meeting that the UN did not recognize or support any parallel government in Afghanistan.

In the election last year, Abdullah was seeking the presidency for the third time, after losing in 2009 and 2014.

Following the 2014 presidential election, Afghanistan was struck by a similar power crisis. Back then, Ghani and Abdullah fought a close and angry race that sparked widespread allegations of fraud and saw the United States step in to broker an awkward power-sharing agreement between the rivals under which Ghani became president and Abdullah became “chief executive.”

On Wednesday, Afghanistan’s former president Hamid Karzai blamed the US’s policies for the current political crisis in the country.