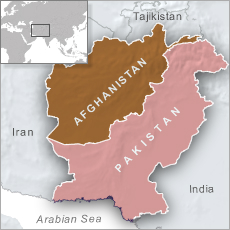 ISLAMABAD — A meeting Britain is hosting Wednesday is expected to resolve the tense border dispute between Afghanistan and Pakistan, officials told VOA hours before the talks.

Pakistan closed its border with landlocked Afghanistan to all traffic nearly a month ago, after a string of terrorist attacks killed scores of people. Authorities in Pakistan blame the violence on fugitive militants Islamabad says are sheltering in Afghan territory.

“We expect as a results of the talks in London and the recent contacts that we have had within the government and with the government of Afghanistan we expect this issue [border talks] to be resolved in the coming week,” Pakistani Trade Minister Khurram Dastgir Khan told VOA in Islamabad.

He said that efforts are under way to open the Afghan border with “heightened security procedures” so that trading resumes as soon as possible.

“That should be an immediate result of it for sure,” a senior Afghan official told VOA when asked if Kabul expected London talks to lead to opening the border. The official requested anonymity because he is directly involved in diplomatic engagements that paved the ground for Wednesday’s meeting.

Khan underscored the need for Pakistan and Afghanistan to separate political and security issues from trade-related activities.

He added that Pakistan sent a proposed draft on “preferential trade agreement” to Kabul several years ago but it has since been awaiting approval by the Afghan National Security Council, making it difficult for his government to meet traders’ demands for separating economics from security issues.

“The government of Prime Minister Nawaz Sharif agrees completely, provided the same understanding is on the other side and whatever hurdles that were present before the recent border closure were because the government of Afghanistan insisted to take both tracks together,” said the minister.

He acknowledged that the decision to close the border has inflicted heavy financial losses on traders in both countries but said he was not in a position to immediately provide estimates.

”They [traders] say it is somewhere around $40-50 million; some people say it is up to $100 million because there is a very large number of traders who deal in perishables. Those numbers take a while to come to us,” he said.

Last week, Islamabad opened the border for only two days to allow tens of thousands of stranded Afghans to return to their country.

Afghanistan depends on Pakistani seaports for international trade, which is considered the war-torn country’s economic lifeline. The border closure has stranded thousands of shipping containers after having left Pakistan’s southern port of Karachi on the Arabian Sea.