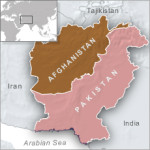 ISLAMABAD — Pakistan closed a key border crossing with Afghanistan for about 10 hours after mortar shells landed on Pakistani territory from across the border.

Vehicles lined up on both sides of the border began moving across the Torkham crossing on the afternoon of January 29 after the gates were reopened, Pakistani and Afghan officials say.

Earlier in the day, Pakistani Foreign Ministry spokeswoman Aisha Farooqui said the border gates had been closed for security reasons after two mortar shells fell near the crossing overnight.

Officials say no casualties were reported but that a number of vehicles were damaged.

Torkham is one of the major border crossings between Pakistan and Afghanistan. Every day, thousands of people and scores of vehicles carrying goods use the gateway connecting Pakistan’s Khyber tribal district with Afghanistan’s Nangarhar Province.

The two neighbors have had uneasy relations, with Kabul accusing Islamabad of supporting Taliban militants. Pakistan denies that.

Exchanges of fire across the border are common.

The border closure comes in the wake of protests in both countries sparked by the detention of the leader of an ethnic Pashtun rights activist in Pakistan.

This week’s detention of Manzoor Pashteen, the leader of a civil rights group that has criticized the Pakistani military’s operations in the northwestern tribal regions, also led to a diplomatic spat between Islamabad and Kabul.

Pashtuns live on both sides of the border.