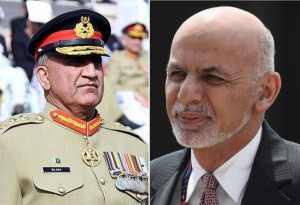 Khaama Press: Referring to border fencing, the Army Chief said that this is an obstacle for checking terrorism and not between people of both sides. Pakistan started work on fencing the line in June last year, covering the areas which the Pakistani authorities are the most prone in terms of the movement of the militants. Major General Nauman Zakaria, the commander for the South Waziristan tribal region had told reporters that no “terrorist” will be able to use Afghan or Pakistani soil to launch cross-border attacks after the fencing is completed. Click here to read more (external link).

4 thoughts on “Durand Line fencing not an obstacle between people of both sides, Bajwa tells Ghani”