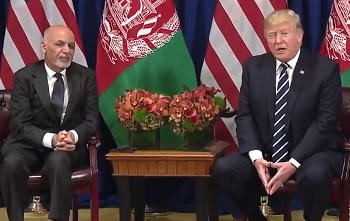 A new U.S. watchdog dog report has undermined efforts to obfuscate the reality that the mission in Afghanistan has failed on every front. This is not an instance of fudging some numbers, for nearly every available yardstick for measuring security, aid, and governance in Afghanistan clearly indicates that Washington has, yet again, blatantly lied to the world.

In December, Resolute Support commanders, for example, claimed that because of President Donald Trump’s “conditions-based” strategy U.S. and Afghan forces were “turning the tide” in the fight against the Taliban, which was easily refuted by the inspector general.

“On the sole quantifiable metric discussed publicly to date – expanding security to 80 percent of the Afghan population… Afghanistan made no significant progress in 2017,” the Defense Department’s Lead Inspector General for Overseas Contingency Operations said in a report released on February 16.

As of late November 2017, the report added, 64 percent of Afghans lived in an area under Afghan government control, a figure unchanged from the previous quarter, this despite the boost in airstrikes and loosening of restrictions that are part and parcel of Trump’s new strategy.

Furthermore, the UN estimated that there were 1.9 million displaced Afghans at the end of 2017, up from more than 1.5 million in the prior year.

Over the course of the past 17 years, the U.S. military has made countless claims of seeing progress, sensing changes in momentum, and feeling they had the Taliban on the run. Despite all of this “progress,” however, by even the Pentagon’s own estimates, the size of the insurgency has always hovered between 20,000 and 30,000 fighters.

Trump’s intensified kinetic operations were supposed to swing the tide, not unlike former President Barack Obama’s counterinsurgency strategy, exemplified by attempts to implement what General Stanley McChrystal referred to as a “government in a box” – hopping from province to province imposing Occidental-style mechanisms on top of indigenous tribal governance structures.

While the current White House seems to eschew such exercises in nation-building and social engineering, parallels in the gaps between claims and reality the Inspector General did note.

“U.S. officials reported similar gains against the Taliban during the troop surge in 2011-2013, and, while there were a variety of different dynamics at the time, the Taliban adapted and persisted,” the report said.

As a solution, the report added, US Forces-Afghanistan (USFOR-A) is looking to rely on quasi-government and warlord-led militias, despite knowing they can hinder local governance by engaging in predatory behavior such as extortion, embezzlement, and drug smuggling. Kabul and the U.S. military are piloting a militia-like creature called the Afghan National Army Territorial Force (ANATF), which prompted a warning from the Inspector General.

“The experience of past locally-sourced force experiments… indicates that such forces are prone to being co-opted by power brokers and preying on local communities,” the report said. “This can destabilize communities, undermine support for the Afghan government, and open the door to Taliban or other extremist influence.”

The mission has also fallen short in other key areas critical for defeating an insurgency, including governance which entails fighting corruption and fostering political unity. The State Department, however, told investigators that Kabul had made “no meaningful progress” in curbing government graft and prosecuting high-level officials.

Another critical success factor for defeating the Taliban, according to the report, is holding legitimate national elections, which President Ashraf Ghani has failed to make progress on until recently.

On Saturday, February 17, at an event celebrating the end of the war with the Soviet Union, Ghani told guests that parliamentary and district council elections must be held on time, and rebutted accusations that his regime is trying to consolidate power.

“Afghanistan is not monopolized by anyone. Afghanistan belongs to the Afghan nation. Our Constitution has solved the fundamental issue of power formation,” Ghani said as quoted by Tolo News.

The Inspector General’s report revealed that State Department and other U.S. government officials are concerned about the ramifications if Ghani is unable to deliver.

“U.S. officials stated that timely elections are an essential component of the South Asia strategy and a vehicle to exert social pressure on the Taliban,” the report said. “Afghan officials and western diplomats expressed concern that a postponed, botched, or illegitimate election in 2018 could destabilize the country.”

With respect to reconciliation, the report mentioned that the UN as of December said: “there was no discernible progress in the peace process.” The report included some other obvious observations including the fact that Afghan-Pakistani tensions have been on the rise and that Pakistan continues to provide sanctuary to insurgents.

None of this is to suggest that resolving any of these issues will be easy. But if progress is not being made the U.S. government must be transparent about the reality on the ground, because obfuscating the truth ends up being counterproductive. And nothing discredits a mission more than trying to feed the public with lies – especially when the lies are so easy to see through.