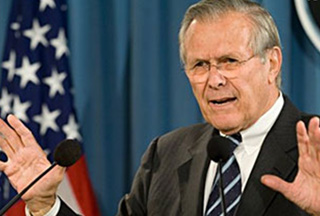 In a famous memorandum dated October 16, 2003 then U.S. Defense Secretary Donald Rumsfeld put forth challenging questions to Joint Chiefs Chairman Richard Myers and other top-level Pentagon officials about the uncertainty around whether the United States was making progress in the struggle against terrorism worldwide.

“Today, we lack metrics to know if we are winning or losing the global war on terror,” Rumsfeld said in the memo. “Are we capturing, killing or deterring and dissuading more terrorists every day than the madrassas and the radical clerics are recruiting, training and deploying against us?”

This question still holds true at the beginning of 2018 especially with respect to the strength of ISIS forces in Afghanistan given the conflicting assessments coming out of Washington and other world capitals.

It is easier to see the erosion of the Islamic State’s foothold in Iraq and Syria which was a battle of body counts and territory recaptured. But the same approach and measurements are not as applicable to Afghanistan given its porous borders with Pakistan, where the Taliban, for example, have been able to regenerate since 2001. Wilson Center Scholar Michael Kugelman believes this will also benefit ISIS in addition to an influx of fighters from Tehrik-i-Taliban Pakistan (TTP).

Commander of U.S. Forces in Afghanistan General John Nicholson confirmed this in a November 28 briefing and through poetic metaphor captured the essence of the elusive ISIS threat.

“It’s like a balloon,” Nicholson said. “We squeeze them in this area, and they’ll try to move out elsewhere.”

Nicholson also trumpeted data points that seem meaningless in the overall scheme of things, pointing out how, since March, U.S. and Afghan forces have conducted 1,400 airstrikes that have removed from the battlefield some 1,600 Islamic State fighters. And, according to Pentagon data, the United States dropped more than three times the number of bombs on Afghanistan in 2017 compared to the previous year.

Yet despite this rapid escalation of kinetic operations ISIS does not appear to be slowing down. On December 31 local officials confirmed to TOLO News that at least 15 people were killed at a funeral in Jalalabad in a bomb blast that appeared to bear the hallmark of ISIS. The incident came just days after a suicide attack on a Shiite cultural center in Kabul that killed 41 – an attack the Islamic State did publicly take responsibility for.

So it is fair to wonder to what extent U.S. and Afghan operations have damaged ISIS overall. The Atlantic’s Krishnadev Calamur poignantly funneled Rumsfeldesque frustration over the uncertainty surrounding the scale of the ISIS threat.

One metric that is very important is gathering some type of order of magnitude feel for the actual number of fighters within ISIS on Afghan territory, a figure which has continually burgeoned as fighters flee Iraq and Syria to join their Khorasan brethren.

Russian Special Presidential Envoy for Afghanistan Zamir Kabulov recently said that, according to their latest estimates, more than 10,000 fighters have joined ISIS in Afghanistan – a figure that sits in stark contrast to U.S. ballpark figures.

At a press briefing on December 12, Resolute Support Future Operations Director Brig. Gen. Lance Bunch claimed there were “maybe a thousand” ISIS fighters in Afghanistan. This is up slightly from an estimate of 700 in March before the United States dropped the so-called “mother of all bombs” – one of the largest non-nuclear ordnance in the U.S. arsenal – on ISIS hideouts which supposedly killed 90 fighters.

After the recent blast at the cultural center in Kabul, journalist Pepe Escobar pointed out that the attack might be an eerie omen for the future, noting that defeat of ISIS in the Euphrates Valley signals not the group’s overall demise.

“We all knew the collapse of the Daesh project would engender a sequel… and the sequel is ISIS-K,” Escobar said in a Facebook post. “This horrible attack in Kabul – targeting children – is a preview of horrors to come.”

Rumsfeld in the same 2003 memo also exhibited typical American bravado in claiming that it was “pretty clear” the coalition would win the war on terrorism at least inside Iraq and Afghanistan. But here we sit some 14 years on and the situation is actually worse.

At least the U.S. knows roughly and has concrete numbers on Taliban control of the country. But it does not seem clear if the United States is willing to admit they are clueless about ISIS. Even more frightening is the prospect that the scale of the ISIS threat in Afghanistan might be – in Rumsfeldian parlance – an “unknown unknown.”