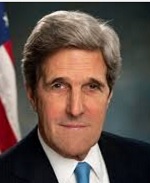 U.S. Secretary of State John Kerry, from Indian soil on August 30, boldly promoted “trilateral” dialogue among the United States, Afghanistan and India while calling out Pakistan to abandon its pro-terror policies. Meanwhile, back in Washington, Pentagon chief Ashton Carter struck a base-sharing arrangement with his Indian counterpart Manohar Parrikar. Both moves mark a departure from America’s typical reluctance to affront Islamabad’s sensibilities, and might herald the dawn of a containment strategy to blunt Pakistan’s use of jihadists as foreign policy tools. However, critics say the real purpose is aimed at checking Chinese influence under the pretext of regional stability. But, who is to say both are not true?

Kerry sagaciously signaled in the clear light of day that Washington is looking to deepen integration of this three-headed anti-Pakistan alliance from a security, economic and political perspective, evidenced by his suggestion that India can play a role in healing the fractured state of affairs in Kabul.

“I think India’s participation, frankly, can only help strengthen those efforts and underscore to the Government of Afghanistan the importance of them being unified, of working through whatever difficulties exist, and of remaining stable in the face of the challenges that they face,” Kerry claimed during a joint briefing alongside Indian External Affairs Minister Sushma Swaraj.

The United States, Kerry continued, will support all efforts to bring the perpetrators of the Mumbai and the Pathankot attacks to justice.

“We cannot and we will not make distinctions between good and bad terrorists,” he added. “Terror is terror no matter where it comes from or who carries it out.”

Mr. Secretary did not stop there. In remarks at the India Institute of Technology Delhi on August 31, Kerry further enunciated the U.S. line.

“It is clear that Pakistan has work to do in order to push harder against its indigenous groups that are engaged in extremist terrorist activities,” the U.S. chief diplomat warned. “And they [Pakistan] must work with us… to help clear the sanctuaries of bad actors who are affecting not only the relationship between Pakistan and India, but also our ability to achieve peace and stability in Afghanistan.”

Indian media of course gloried in this burst of American support as the U.S. pivot away from Pakistan grew wider. According to the Times of India, the willingness of a top U.S. official to take a critical line on Pakistan from Indian soil “was indicative of the frustration and resulting shift in U.S. focus eastward to New Delhi.”

As previously observed in AOP, we saw that Washington had clearly pivoted towards New Delhi in the Indo-Pakistani proxy war being waged inside Afghanistan. Now, it seems the United States is in full proactive pursuit of leveraging its relationships with India and Afghanistan to squeeze Islamabad even harder.

U.S. strategy perhaps is premised on the assumption that Pakistan’s jihadist infrastructure can never be fully extirpated and Islamabad must simply – and hopefully – be kept in check. Not unlike what American pro football defensive coordinators during the 1980s would say before playing against a certain prolific Chicago Bears running back: “You cannot stop Walter Payton, you can only hope to contain him.”

The Pakistani press, predictably, was not going to sit by idly as the walls close in on Islamabad, the victim once again of a U.S.-Indian conspiracy. The Nation’s Jalees Hazir said Kerry arrived in New Delhi hours after the defense deal was signed and “unveiled the blue-print for Uncle Sam’s divide-and-rule agenda for the region” – as if the United States was driving a wedge between such close partners. Hazir called Washington’s bluff, claiming that it is using Afghanistan’s instability as a pretext to foil Islamabad.

“The US-India alliance aims to speed up the hybrid war against Pakistan in the garb of ‘stabilising Afghanistan’ and ‘countering terrorism’… it is this undeclared thrust of this axis of evil aimed directly at Pakistan that we must prepare ourselves to fight,” Hazir writes.

It is worth noting Hazir’s other hyperbolic conclusion, that “India has decided which side it is on in the Third World War. And there should be no confusion on our part on this count.”

Pakistani Prime Minister Nawaz Sharif’s advisor on Foreign Affairs, Sartaj Aziz, rejected the notion, however, that Islamabad is being isolated internationally and claimed that the government has taken indiscriminate action against all militant groups.

Aziz also said, in reaction to Kerry’s visit to New Delhi, that U.S.-Indian cooperation has increased recently because Washington is acting on its policy to contain China’s growing influence. As opposed, one can surmise, to containing Pakistan’s support for terrorism.

The defense pact announced by Carter and Parrikar, Dawn.com’s Anwar Iqbal argues, “allows the two allies to use each other’s military facilities for checking China’s growing influence in Asia and in the fight against terrorists.”

Of course, the reality is these objectives are not mutually exclusive. It is highly possible the U.S. cutting off military aid to Pakistan and tightening relations with India and Afghanistan is Washington surrendering to the fact that it can no longer trust Islamabad to root out terrorists. This does not mean, however, that the United States would also not love to see these machinations contribute to countering China.

And, to be fair, one does get the sense that Afghanistan is sitting in the middle of all this as more of a lever than a player. A pawn within a larger game of geopolitical chess. A position and a game, unfortunately, the Afghans are all too familiar with.