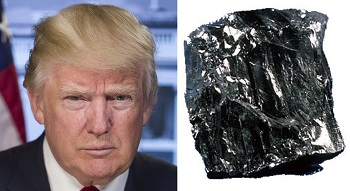 U.S. corporations are in secret talks with Afghan officials about exploiting the country’s coal industry in what appears like another ploy by the Trump administration to profit off the war while countering China’s dominance of the mining sector. Ironically, the discussions are occurring just as a watchdog report reveals yet again how the U.S. has mishandled billions in reconstruction funding.

On Friday, February 2, Voice of America reported that the coal negotiations represent a first step toward wider American investment in Afghanistan’s potentially lucrative industrial mining sector which is in line with President Donald Trump’s demand for a better return on investment.

Earlier this week, however, the U.S. Special Inspector General for Afghan Reconstruction (SIGAR) in its latest audit reported that Department of Defense (DOD) agencies lost track of billions of dollars’ worth of funding on infrastructure projects to support the Afghan National Defense and Security Forces (ANDSF).

SIGAR found, after studying a sample among a list of 1,189 construction and capital-improvement contracts, that DOD failed to properly maintain real-property transfer forms thereby forcing the U.S. to spend an additional $229 million to develop a comprehensive inventory of infrastructure.

Compounding this situation are ANDSF infrastructure construction deficiencies due to shortcomings in the Pentagon’s oversight of contracts, the report added, including with respect to warranty procedures.

“By not taking advantage of the protections afforded by warranty clauses included in construction contracts, DOD runs the risk that U.S. taxpayers or the Afghan government will have to bear the additional cost of repairing construction deficiencies,” the report added.

The U.S. government, in addition, cannot determine if a $245 million contract awarded to the Virginia-based IDS International Government Services LLC (IDS International) “is achieving its goal of preparing ANDSF personnel to independently maintain their infrastructure.”

Some would argue that, well, this is what happens when you put the government in charge of anything, so let the private sector fix it, missing the point that private contractors have raped Afghanistan for some 17 years now.

Afghanistan’s power sector provides a case study in how the U.S. and a stable of corrupt contractors have delivered on industrial projects. SIGAR in 2016 reported that despite $3 billion invested in Afghanistan’s power industry the country still suffers from one of the worst electrification rates in the world.

The notorious Louis Berger Group, whose executives had to settle criminal charges of fraudulently overbilling the government on reconstruction projects, helped build the $335 million Tarakhil power plant, a veritable monument to contractor malfeasance. The plant operated for more than a year at a mindboggling rate of under one percent of its production capacity.

It is likely the coal industry profiteers will not be much different than LBG – entities driven by free market ideology in full pursuit of an end that has little to do with the well-being of the Afghans.

The VOA report also suggested that U.S. companies involved in the coal deal would be well-placed to take advantage of opportunities to exploit rare earth elements.

“Trump has complained the U.S. is not profiting from the conflict, leaving China to take the lead in exploring the country’s natural resources,” the VOA report pointed out. “Specifically, Trump has had his eye on Afghanistan’s vast supply of untapped mineral deposits, which the U.S. Geological Survey estimated in 2010 were worth as much as $1 trillion.”

This concept has been fueled by Erik Prince – founder of the security contractor formerly known as Blackwater – who wants to privatize the war through a strategy based on the neocolonial British East India Company model.

Prince proposed to Trump aides last year that the White House appoint him as Viceroy to oversee an army of private contractors, the bill of which could be paid for by a “strategic mineral resource extraction funded effort” targeting uranium, phosphate and rare earth deposits in Helmand and Nangarhar provinces.

The perils of mining in a war zone is another factor to consider. Coal does not face the same type of problems as mining more lucrative materials, yet it is still dangerous. Pajhwok reported in early January that three times within a month, militants burnt trucks carrying materials to the Shabashak Coalmine in northern Samangan province.

In addition, there are logistics nightmares for companies hoping to export any products post-extraction. The only viable route to ship the resources from Afghanistan runs through Pakistan, a country more and more at odds with Washington and Kabul over Islamabad’s failure to root out terrorists.

So the coal mining brainchild seems dead on arrival in the face of contractor fraud, the resource curse, a raging insurgency, and geopolitical realities that complicate the supply chain.