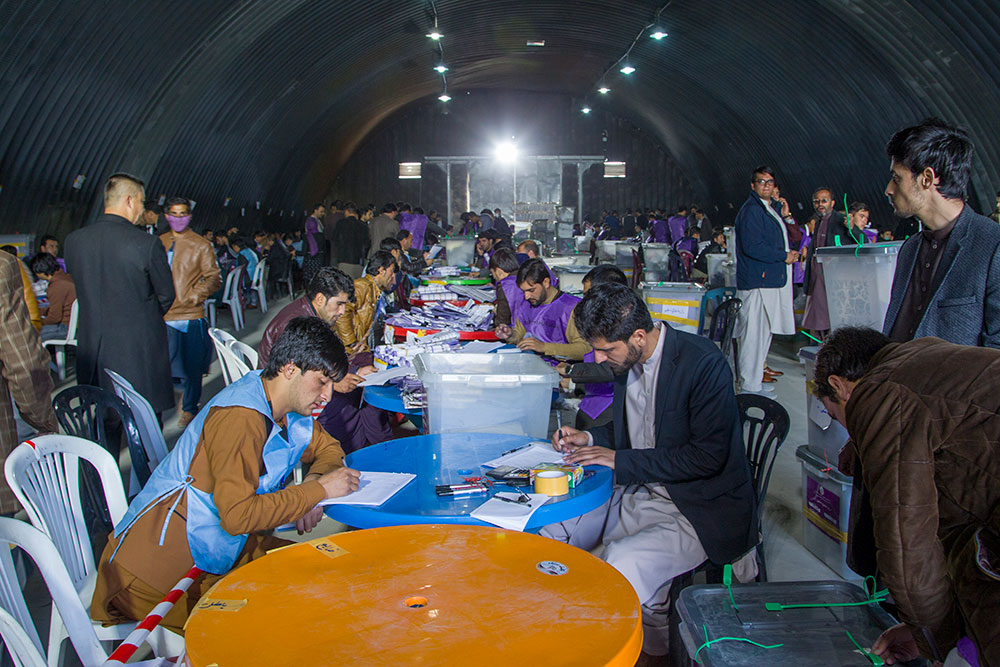 It did not take too long for the United States to ramp up efforts to delegitimize the recent Afghan presidential election – a process that was already destined to fail due to Washington’s interference. In light of the recent collapse in the U.S.-Taliban talks, it is not clear as to why the Trump administration continues to share the insurgents’ goal of undermining the ultimate victor, whether it be Ghani, Abdullah or another party. But, rest assured, dark forces are likely hard at work in Foggy Bottom machinating a new roadmap for Afghanistan.

Afghanistan’s presidential election saw a historically low turnout – only 2.5 million, around 30 percent  of those registered, cast ballots, although that was somewhat predictable given Taliban threats, U.S. meddling and concerns over fraud. However, what was unexpected was that Taliban attacks and voting irregularities were also much lower than previous races.

Meanwhile, the votes are being tabulated. Candidates are not allowed to declare victory before October 19 and the final tally will not be announced by the Independent Election Commission (IEC) until November 7.

This, of course, did not stop Washington from prematurely slamming the IEC. U.S. Ambassador and diplomatic troll John Bass took to twitter to “muddy the waters” so to speak without a shred of evidence.

“Concerned about mixed reports for when @AfghanistanIEC will open National Tally Center adding to confusion and uncertainty surrounding #AfghanElections.  It’s important for the IEC to clarify for domestic observers and the #Afghan people,” Bass said in a Tweet on October 1.

Bass, in true troll fashion, added a snarky hashtag, “#IECTransparency” in an apparent attempt to generate a Twitter wave of outrage over a situation that is still in process.

About eight hours before Bass’s diplomatic transgression, UN envoy Tadamichi Yamamo visited the National Tally Center to observe officials working to tabulate and verify the vote. The UN even called on representatives from each campaign to swing by and check things out.

Hence, it appears Bass raised unfounded concerns about the vote count – in other words, the State Department was caught red-handed spreading fake news.

Bass’s effort to fuel confusion is part of an initiative that began months ago to undermine the process. In fact, just days before the election one of the most undiplomatic Secretaries of State in U.S. history – Mike Pompeo – started stirring fears of vote fraud. During a phone call on September 26, Pompeo warned Ghani that the Afghan elections better be squeaky clean.

“Pompeo spoke with Afghanistan’s President Ghani today to underscore the United States’ expectation that the conduct of candidates and government institutions holding the Afghanistan election should be beyond reproach to ensure the legitimacy of the outcome,” State Department spokesperson Morgan Ortagus said in a statement.

Such a high standard of purity is quite hypocritical of Pompeo to lay down in light of American electoral shenanigans in places like Florida during the 2000 presidential contest or any vote ever held in places like Chicago.

Before the election, Washington sought to establish a purity test that was impossible to reach and, now, soon after the vote the State Department is hinting that the Afghan election commission is fixing the results.

The attack on the legitimacy of the election was originally largely driven by special envoy Zalmay Khalilzad who was trying to strike a peace deal with the Taliban in negotiations that excluded Kabul. In the run up to the vote, Khalilzad went so far as to suggest postponing the election until the so-called peace deal was consummated. The uncertainty over whether the election would even take place certainty dampened the spirit of potential voters.

It also appeared as if the U.S. wanted to upend Ghani’s campaign specifically considering the State Department right before the election publicly slammed the Afghan government for being corrupt and inept.

“Due to identified Afghan Government corruption and financial mismanagement, the US government is returning approximately $100 million to the US Treasury that was intended for a large energy infrastructure project,” Pompeo said in a statement on September 19.

US inspector generals have pointed out Afghan government abuse and corruption for years and Pompeo decides to do something about it the week before the election?

It was easier to understand the motives behind this strategy when the U.S. and the Taliban were getting closer to reaching an agreement. Yet in early September Trump announced that U.S. talks with the Taliban were “dead” after the insurgents killed an American troop.

In any case, one wonders what the United States is trying to achieve because questioning the integrity of the election process only lends credence to Taliban claims that the vote is illegitimate.

Meanwhile, the dark lord himself Khalilzad, who has experience hijacking Afghan elections and playing the role of kingmaker, has not tweeted in more than 30 days. One can only imagine what strings the wheeling and dealing “miracle worker” is pulling behind the scenes.