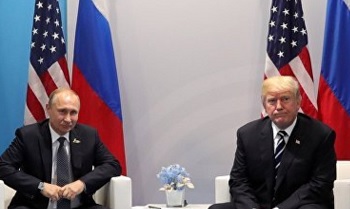 It has become fashionable in many circles to fault Russia for all the world’s ills and the conflict in Afghanistan is no different. U.S. military leaders, in search of another handy excuse for the colossal failure of its 16-plus-year occupation, have continued to insist that Moscow is arming the Taliban – a group that, it is worth mentioning, is outlawed in Russia. The truth is, however, this side of Pakistan, the insurgents have acquired far more weapons and funding from the U.S. and its Afghan partners than from any other sources on earth.

Commander of U.S. forces in Afghanistan General John Nicholson on March 23 repeated the charge in an interview with BBC that Russia was supplying arms to the Taliban without, mind you, positing a shred of evidence. On Thursday, March 29, Russian Envoy Zamir Kabulov bluntly suggested what might be driving the Pentagon’s latest narrative.

“From the United States’ perspective, this might be the perfect justification for its failures in Afghanistan,” Kabulov said during a press conference at the Rossiya Segodnya International Information Agency.

“CSTC-A officials did not have assurance that $3.1 billion in U.S. direct funding was used entirely for the intended purposes,” the report, dated March 21, revealed. The funding, the report added, is at increased risk of fraud and abuse while materials – including ammunition, fuel, and vehicles – are at high risk of diversion and theft.

For example, military officials said they did not have an accurate inventory of around 95,000 vehicles. The Long War Journal reported that while some unaccounted for Humvees and pickups ended up back at bases “reported as destroyed in battle,” some likely were commandeered by the insurgency.

In 2016, a non-declassified Pentagon audit revealed that nearly 50 percent of the 1.5 million firearms provided to Iraqi and Afghan security forces went missing, including nearly 978,000 M4 and M16s. The Special Inspector General for Afghanistan Reconstruction in 2014 discovered that 43 percent of the weapons provided to Afghan forces “likely ended up in the hands of ISIS or the Taliban.”

The Taliban have benefitted even more by acquiring U.S. funds rather than simply weapons and vehicles. According to journalist Douglas Wissing in Funding the Enemy: How U.S. Taxpayers Bankroll the Taliban, experts estimated that the Taliban skimmed close to $1 billion per year of U.S. foreign aid. Funds diverted from poorly-run counterinsurgency programs, ill-devised USAID projects, and countless logistics extortion rings has fueled the insurgency.

In 2010, a congressional committee report called “Warlord, Inc.” found that the U.S. military was supporting an extortion racket that indirectly paid tens of millions of dollars to the Taliban to “protect” supply convoys. One trucking program manager estimated that up to $2 million per week flooded Taliban coffers from supply chain projects alone.

What’s also amazing is that this narrative of Russia supporting the Taliban has caught fire in the stark absence of any proof besides a CNN video clip of Taliban wielding AK-47 Kalashnikov assault rifles.

This is quite a rich conclusion given the AK-style assault rifle is one of the most ubiquitous models on the planet with around 100 million in circulation worldwide – not to mention a mainstay among militants in Afghanistan since flooding black markets during the jihad against the Soviets. Pakistan has been exposed for manufacturing countless AK clones and, for decades, Afghan and Pakistani rights groups have bemoaned the “Kalashnikov culture” that has affected youth in both countries – insurgent and non-insurgent alike.

Also, consider that Russian Foreign Minister Sergey Lavrov at the end of last year said Moscow had donated some 50,000 AKs to the Afghan government. That these should wind up in Taliban stockpiles is, plainly, not Russia’s fault. This, however, is yet another inconvenient fact omitted from U.S. media reports.

Russia arming the Taliban to undermine U.S. efforts in Afghanistan might seem like a twisted poetic justice given Washington backed the mujahideen in the war against the Soviets. Kabul, of course, would love any weaponry or money it can get, yet there is little appetite among the Afghan population for Russia playing any role in its affairs despite the fact Moscow has legitimate security interests tied to the fate of the country.

However, it is highly doubtful that the Russian government would be willing to take the risk of supporting the Taliban given the likelihood of blowback. Although one can only speculate, Russia probably has learned the perils of arming extremists by simply observing how America’s mujahideen endeavor panned out – a horror story that began in the early 1970s and culminated with the events on September 11, 2001 – when the U.S. Frankensteinian creation came home to roost.