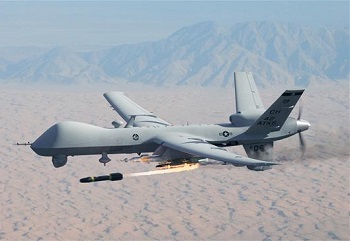 The United States is not satisfied with simply intensifying airstrikes and loosening rules of engagements to terrorize the Afghan population because now it appears the White House is tempted to launch a CIA-run covert drone war.

“The C.I.A. is pushing for expanded powers to carry out covert drone strikes in Afghanistan and other active war zones, a proposal that the White House appears to favor despite the misgivings of some at the Pentagon,” the New York Times reported on September 15. “If approved by President Trump, it would mark the first time the C.I.A. has had such powers in Afghanistan.”

The plan would allow the CIA to expand “beyond its existing authority to carry out covert strikes against Al Qaeda and other terrorist targets across the border in Pakistan,” the report added. This is significant because, although drone strikes in the hands of the Pentagon is bad enough, at least the military “publicly acknowledges its strikes, unlike the C.I.A.,” according to the Times.

We have argued that in previous stories for AOP how Obama left for his predecessor a covert extrajudicial drone targeting program that affords the executive unchecked power to employ American military force anywhere in the world with little to no accountability or congressional oversight.

It was Obama who normalized the notion of targeted assassinations, expanded executive authority, and paved the way for indefinite war with no geographic boundaries. Trump is now prepared to take this unchecked power to the next level.

Human rights groups are already extremely concerned about Trump’s new Afghan war strategy launched last month that will intensify the air campaign in tandem with less restrictions on the use of force and the delegation of authorities for airstrikes to the lowest ranks.

“We believe the intensification of the conflict has already caused great harm to civilians, and that is likely to get worse,” Human Rights Watch Senior Researcher Patricia Gossman told The Globe Post on September 14. She added that they were “particularly worried about the expanded use of air power.”

And, now, by adding CIA drone strikes to the mix, civilian deaths unaccounted for will also be on the rise.

“CIA drone strikes take place under Title 50 covert action authority, meaning that the operations are not meant to be acknowledged,” Robert Chesney, Professor of Law at Tufts University wrote in a Lawfare piece in March. “Meanwhile, there were many… who claimed that CIA is subject to insufficient legislative oversight, and that CIA lacks the military’s culture of compliance with the law of armed conflict.”

The ACLU, Chesney noted, has argued that “the Pentagon should be used for such strikes because it is more publicly accountable to policy makers, members of Congress and the American public.”

The CIA program provides the executive branch a convenient tool to remove short-term irritants, with Obama and Bush setting precedents for approving “personality” strikes aimed at named, high-value terrorists and “signature” strikes targeting training camps and “suspicious compounds in areas controlled by militants,” according to The Atlantic, criteria which the State Department previously complained was too lax and has led to inaccurate death tolls.

Beyond accountability and moral hazard issues there are also legal and ethical implications related to drone strokes both overt and covert. Targeted assassination via drone seems intuitively dubious when an 18-year old in front of a Playstation in Nevada can play judge, jury and executioner in one fell swoop.

While outraged by waterboarding and treatment of prisoners at Guantanamo, many Democrats appeared comfortable with instantly killing a suspect without any due process.

French philosopher Grégoire Chamayou, in his book A Theory of the Drone, puts the moral dilemma in thought-provoking perspective, arguing that the nature of drone warfare has created a crisis in the just war doctrine given the “ethics of combat shifts and becomes an ethic of putting to death, a necroethic that makes use of jus in bello in order to convert them into a criteria of acceptable murder.”

Chamayou argues that drone assassinations afford the military an asymmetric advantage that defy norms of warfare by failing to provide the same reciprocity of risk. Hence, regardless how evil the targets, the very nature of the attacks are illegitimate.

Efficacy is yet another factor: Several studies have shown that CIA drone strikes have ended up creating more terrorists than the U.S. sought to eliminate in the first place. In short, the covert drone program is illegal, unethical, and counterproductive.

Yet the unmanned aerial vehicle under CIA auspices provides the White House with the ideal mode of destruction from a political standpoint because no Americans will ever be in harm’s way and no one will be held accountable for civilian deaths. Thus, it is a miracle the U.S. has waited this long to unleash the secret drones over the skies of Afghanistan.