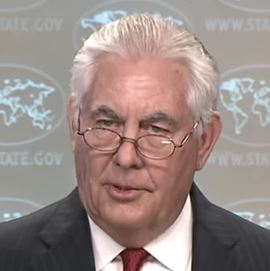 Outgoing U.S. Secretary of State Rex Tillerson largely paid lip service to the Afghan peace process as evidenced by his State Department’s utter failure to establish a diplomatic track for ending the conflict. However, President Donald Trump’s decision to tap CIA Director Mike Pompeo to replace Tillerson may have driven the final nail into the coffin of a peaceful resolution to the 17-year war.

Afghan President Ashraf Ghani, meanwhile, bolstered by a recent Taliban peace offer, has desperately been trying to breathe new life into the negotiations process. Yet, according to the Pentagon, Defense Secretary James Mattis during a meeting on Wednesday, March 14, basically told Ghani straight away that Taliban overtures to talk should not impede military efforts.

“Mattis emphasized that the recent peace offer does not eliminate the need for offensive operations against the Taliban, and noted the importance of continued… progress on the battlefield,” the Defense Department said in a readout of the meeting.

Enter Pompeo, whose mentality is ill-suited for playing the role of the United States’ top diplomat, especially when it comes to conflicts like the war in Afghanistan. Not unlike his counterpart at the Defense Department, Pompeo either sincerely believes U.S. and Afghan forces can kill-and-capture their way to victory or he simply prefers perpetual war.

For instance, the CIA chief sought to expand the agency’s lawless covert drone program across Afghanistan and, according to the New York Times, Pompeo even deployed “small teams of highly experienced officers and contractors alongside Afghan troops to hunt and kill Taliban militants across the country.”

During a speech in Texas last fall, Mr. Pompeo made his philosophy on Afghanistan crystal clear.

“We can’t perform our mission if we’re not aggressive,” Pompeo said. “This is unforgiving, relentless. You pick the word. Every minute, we have to be focused on crushing our enemies.”

Not unlike during the Obama administration, the State Department has played a negligible role in Afghanistan and Tillerson has always been the voice in the wilderness that no one can or wants to listen to.  Of course, the former Exxon Mobil CEO’s lethal error was not butting heads with other cabinet ministers, it was contradicting his megalomaniac of a boss.

“Innocent people are being killed left and right. Bombing, in the middle of children, in the middle of families, bombing, killing all over Afghanistan,” Trump told a delegation from the U.N. Security Council at the White House in January. “So we don’t want to talk with the Taliban. There may be a time but it’s going to be a long time.”

Sitting right next to the president at the time was Tillerson, who previously claimed that the United States would support peace talks with the Taliban “without preconditions.”

Last August Trump was running around telling the world that the United States was going to prevail in the war against the Taliban while Tillerson struck a different cord during a briefing at the State Department where he directly addressed the insurgent movement.

“You [Taliban] will not win a battlefield victory,” Tillerson said. “We may not win one, but neither will you.”

Tillerson in October had the audacity to reach out to determine if the Taliban office in Qatar had legitimate representatives who could speak on behalf of the entire insurgency in political negotiations. Trump, for his part, wants the office shuttered.

Instead of embracing any semblance of a peace process, Trump unveiled a South Asia strategy in August almost entirely focused on defeating the Taliban militarily. The plan boosted the U.S. presence in Afghanistan from 11,000 to nearly 15,000 troops, indefinitely. The plan also intensified the air campaign and loosened rules of engagement – both of which have already led to increases in the civilian death toll.

Let’s be clear: Even if the entire U.S. administration wholeheartedly supported peace talks with the Taliban that would not amount to much. The war will end when – and only when – the Afghan government, the people of Afghanistan, and the Taliban are all willing to reach an inclusive legitimate political solution. At best, outsiders might be able to shepherd the process but, in the main, they should stay out of the way.

However, with that being said, the United States can undermine any peace settlement – as it has in the past – and Ghani, it has been made clear, essentially takes orders from Washington. In short, for all practical purposes, the U.S. military has a de facto veto on a peace deal.

Hence, when the only voice whispering into the president’s ear advocating for a non-military solution to the conflict in Afghanistan is eliminated, Trump is left to his own devices and the council of hawkish advisers who have little comprehension of the value of diplomacy. In fact, they don’t want to understand.