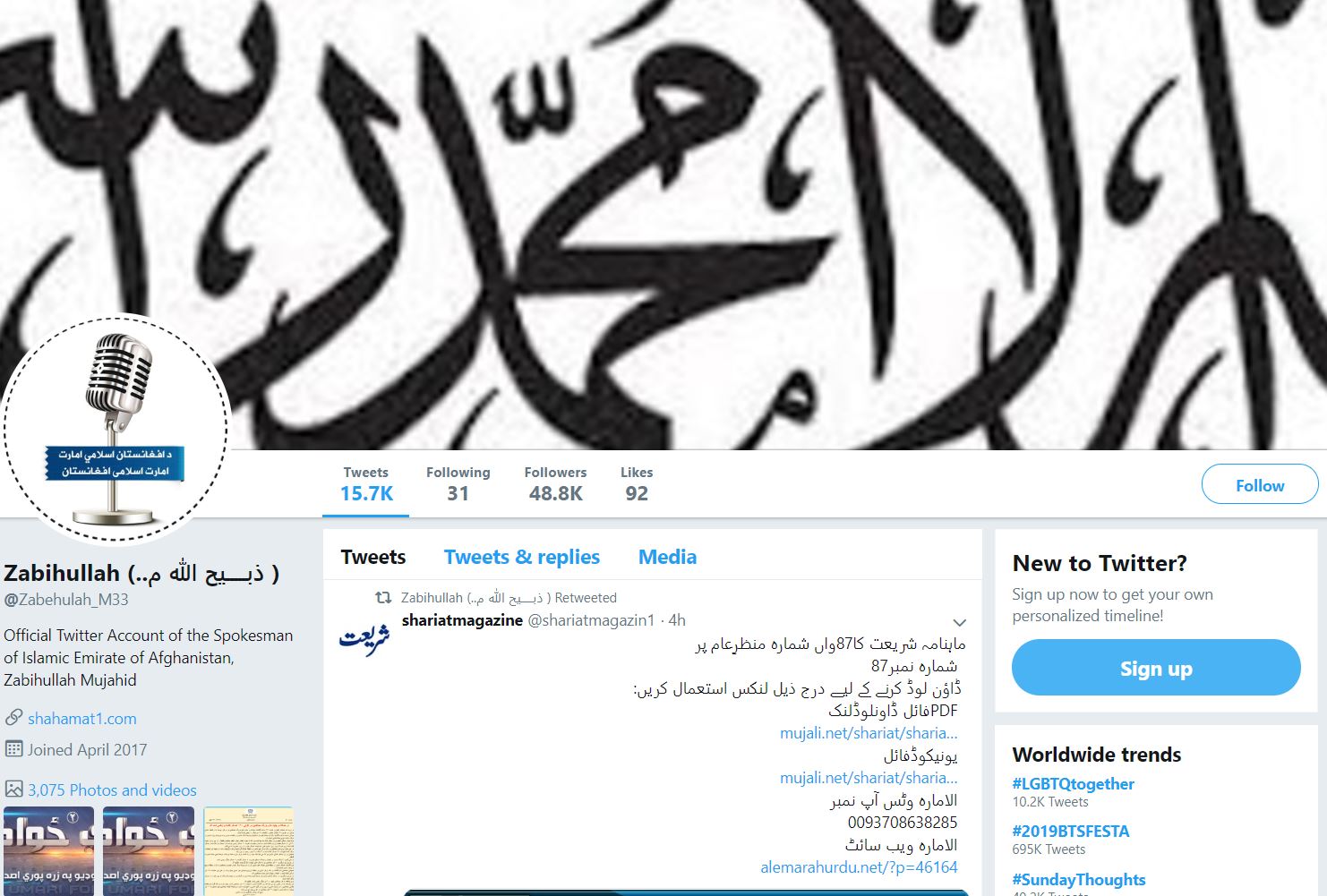 There are two very concerning trends recently observed about the new breed of Taliban fighter. The younger generation of Taliban have proven more adept than their predecessors at exploiting technology to wage war both on the physical field of battle and in the propaganda sphere. At the same time these Taliban millennials and post-millennials have proven to be even more radical and extremist than those of Mullah Omar’s generation.  In short, the Taliban are capitalizing on modern technological advances to spread a not-so-modern and oftentimes barbaric value system.

Former Afghan intelligence chief Amrullah Saleh commented on this phenomenon while taking a shot at recent Taliban talks hosted by the Russians.

“The latest round of chaotic & congested talks in Moscow show the Taliban’s logic is stuck in bronze age although they have sophisticated weapons. They only repeat the few sentences uploaded in them by their handlers next door,” Saleh said in a Twitter post on May 29.

Although the Taliban embrace of cutting-edge technology is nothing new, the insurgents have grown increasingly more sophisticated in recent years. In April, the New York Times reported that the Taliban have been using night-vision goggles, lasers and other high-tech weaponry.

The Times said newly released documents reveal that the Pentagon is concerned about the Taliban’s “growing sophistication on the battlefield after 16 years of war.”

An unnamed U.S. military official said with the newfound “battlefield visibility” the Taliban doubled the number of nighttime attacks from 2014 to 2017 while the number of Afghan troops wounded or killed tripled during the same period. The night-vision equipment has allowed Taliban fighters to approach Afghan bases “nearly undetected,” the report said.

Drones and precision weapons are also at risk of being seized by the Taliban as they have in other conflict zones. As a result, U.S. commanders have considered limiting access to such equipment, a move that could ironically give the Taliban a high-tech edge over Afghan government security forces.

“Commanders now worry that denying the expensive equipment to those [Afghan] forces puts them at a technological disadvantage, with potentially lethal consequences,” Thomas Gibbons-Neff and Jawad Sukhanyar reported.

The “growing sophistication” of the Taliban use of advanced weapons and their keen ability to harness the power of social media contrasts sharply with the insurgents’ adherence to a code that most Afghans find antithetical to the Islamic faith. In fact, the movement’s younger members may be worse than their fathers.

Sushant Sareen, a Senior Fellow with the Observer Research Foundation, argued in an analysis earlier this year that the current Taliban members are even more radical, reactionary and brutal “than the original lot.”

Slick Taliban negotiators have peddled the notion that the movement, if it comes to power, will respect women’s rights (that is, if they are rooted in so-called Islamic principles. Whatever that means).

It is important to note that many doubt the values being pushed by the Taliban at the negotiating table represent the values of Taliban fighters in the field. Former Foreign Service Officer David Rank argued in a paper for the U.S. Institute of Peace last year that most among the current crop of Taliban are less likely to compromise.

“A new generation of Taliban and IS-affiliated fighters is emerging – one that came of age in an era of conflict with NATO forces and the insurgency’s brutal use of attacks on civilians in pursuit of its goals. These militants are most likely less amenable than their elders to the idea of negotiated integration into the Afghan political structure,” Rank said.

Of course, we must now include the disclaimer required when any former or current U.S. government official starts lecturing about the Taliban’s radicalism. Let us not forget that the Taliban would probably not even exist if the United States did not fund and arm and groom their forefathers during the 1970s and 1980s via Pakistan’s intelligence services.

Former President Jimmy Carter’s National Security Adviser, Zbigniew Brzezinski, fully admitted this in a 1998 interview. Mr. Brzezinski posited the following rhetorical questions: “What is more important in world history? The Taliban or the collapse of the Soviet empire? Some agitated Moslems or the liberation of Central Europe and the end of the Cold War?”

For starters, Mr. Brzezinski’s analysis is based on false assumptions considering there is little evidence to prove the Soviet Union collapsed because of the war in Afghanistan. Hence, for no legitimate reason, we are now left with extremists who are more “agitated,” more technologically equipped – and more lethal than ever.