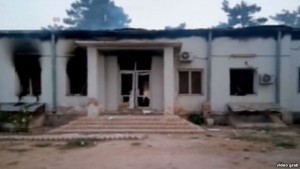 FILE – Hospital hit by U.S. airstrike killed at least 30 people, including three children, according to officials with the international medical charity Doctors Without Borders, Kunduz, Afghanistan.

The Pentagon on Wednesday attempted to chalk up the bombardment of a Doctors Without Borders (MSF) hospital in Kunduz, Afghanistan to a series of human slipups and technical glitches, prompting MSF to scathingly declare that the so-called “human errors” in question amounted to war crimes. Now, the silence emanating from Washington is deafening as the world awaits a response on when and if an outside independent body – one not party to the incident – will be called in to end the absurdity of allowing the United States military to continue investigating its own transgressions.

U.S. investigators, however, failed to cover up the gross negligence within their own report. MSF noted that, according to U.S. findings, 30 people were massacred on October 3, 2015 largely because the hospital was the closest large building in an open field that “roughly matched” a description of the intended target. MSF General Director Christopher Stokes was hardly satisfied with these excuses.

“The destruction of a protected facility without verifying the target – in this case a functioning hospital full of medical staff and patients – cannot only be dismissed as individual human error or breaches of the U.S. rules of engagement,” Stokes said in a statement.

In fact, the Pentagon report also reveals that the U.S. military had the coordinates for the MSF facility which was on “a no-strike list” but, apparently, they did not connect the dots. General John F. Campbell, commander, U.S. forces in Afghanistan tried to explain this phenomenon in a press briefing:

The Pentagon self-probe does not explore the elephant in the room of course, and focuses on “human and process errors” as the reason why the US attacked a hospital and killed dozens of patients and medical staff, some of whom were gunned down as they were fleeing. At some point during that attack it would be reasonable to expect that well-trained military personnel would be able to distinguish between aid workers/patients and Taliban fighters. That is, assuming they actually cared to do so.

The underlying issue with the U.S. military has nothing to do with policy, procedures, technology, geospatial coordinate gathering or miscommunication, because the real problem is the entire American mindset in Afghanistan, a land where everyone in their way is expendable. Afghan Peace Volunteers Co-Founder Dr. Hakim told this scribe earlier this month that the Kunduz bombing appeared to be the result of a “spare-no-one” approach driven by the necessity to kill all high-value targets or enemy combatants “at any cost,” reminiscent of the My Lai massacre in Vietnam wherein military commanders ordered troops to “kill everything that moves.”

The hospital in Kunduz lost its protection status, Hakim added, due to the ugly prerogatives of war and other such facilities should not assume they are protected going forward because without an independent investigation the military will continue to operate indiscriminately with impunity. This is why the MSF, Hakim and others have called for an investigation by an independent body like the International Humanitarian Fact-finding Commission (IHFFC).

“Since the IHFFC has never been called upon to investigate any incident, it is possible that militaries presume that there are likely no serious consequences to removing the protection status of places or people as specified in the Geneva Conventions,” Dr. Hakim said.

In fact, the right to have someone like IHFFC investigate is established under Additional Protocol I to the Geneva Conventions, Thomas Jefferson Law Professor Marjorie Cohn wrote shortly after the incident. However, the United States must consent to the investigation. And the U.S. government, she added, claims there are enough investigations: “one by the Pentagon, one by a joint U.S.-Afghan group, and one by NATO. But none of these is independent and impartial.”

And we should not hold our breath that the US government will consent anytime soon, especially considering the Obama administration has tried to undermine other independent investigations undertaken by the International Criminal Court (ICC) in Afghanistan, according to David Bosco over at Lawfare.

Kunduz represents one of the worst cases of civilian casualties in Afghanistan and raises questions around what really happened in previous cases of “collateral damage.” As of January 2015, more than 26,000 civilians have died violent deaths as a result of the war in Afghanistan, according to a Brown University study. And it is fair to wonder how many of those fatalities were, in the words of General Campbell, “avoidable.”