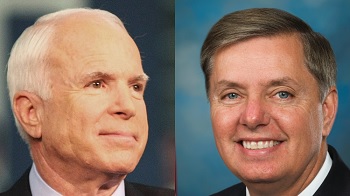 From the grave existential philosopher John Paul Sartre can shed light on why US politicians, such as Senators John McCain and Lindsey Graham – two warmongers who never came across a Muslim country they would not bomb – continue to call for more troops in Afghanistan despite clear impediments, ranging from sanctuaries in Pakistan to political gridlock in Kabul, that make a military solution unworkable. Sartre would argue that certain people are not simply ignorant, they choose not to understand the truth because it interferes with his or her life “project,” which for most in Washington comprises filling one’s coffers to get reelected.

The double-headed neocon monster, hereafter known in the collective as McCain-Graham, co-authored a vacuous essay published in The Washington Post on March 13 full of clichés about 9/11 and fighting terrorism and standing by the people of Afghanistan. Then, suddenly, amid their simple minded prose and absurd arguments rose a brute shiny concrete undeniable fact – one that we now know they must know.

“US efforts to confront these terrorist threats [in Afghanistan] are continually frustrated by terrorist sanctuaries in Pakistan used to attack across its border and kill US forces,” McCain-Graham wrote.

A reasonable person might then conclude that until these safe havens in neighboring Pakistan are uprooted, among other problems we have previously enumerated in these very pages, throwing more troops at the problem would be an entirely futile endeavor. A reasonable person, with or without an alter ego, might think. Unless, of course, he or she (or they) were McCain-Graham.

“Our assessment, based on our conversations with commanders on the ground, is that a strategy for success will require additional US and coalition forces and more flexible authorities,” they wrote.

As Sartre stressed in his masterpiece, Being and Nothingness, originally published in 1943, man can choose anything except not to choose – in other words, man is condemned to be free. This causes anguish because of the nearly unbearable responsibility of having to choose and the fact that one is responsible for every one of his or her decisions in the face of verifiable truths.

However, Sartre claims ignorance, which he considers an intentional act, is one way to avoid responsibility. For example, if McCain-Graham actually embraced the truth they would be “accomplices” – so to speak – in the destruction resulting from the imposition of their military solution. In short, choosing to ignore is a refusal of responsibility and a willingness to rely on chance.

Moreover, ends McCain-Graham are pursuing in their life projects are so crucial it seems as if they are willing to break from reality, a self-deception that leads to a type of psychosis, praying the laws of nature will somehow be suspended and by some magic Pakistani sanctuaries dry up and political unity springs eternal in Kabul. But, then, there is a slide from simply ignoring reality into something even deeper.

“Therefore, the will to ignore the truth turns necessarily into the denial of truth,” Sartre explains in Truth and Existence.

If McCain-Graham wanted to know the truth they would ask for indigenous insight, which is precisely the reason they choose not to even attempt to understand the native perspective. After all, remember, they based their final verdict on “conversations with commanders on the ground.”

Practically speaking, the politician must also deal with the politically feasible. In other words, whether it is McCain-Graham or President Trump, a politician cannot alienate his or her constituents by backing an unpopular strategy because the primary goal in a politician’s world is to get reelected: His or her very reason for being.

Hence, truth actually represents an existential threat to politicians especially when it comes to crafting policies to address a complex dilemma like the war in Afghanistan. Adopting policies that have the long-term interests of Afghanistan in mind could spell political suicide for an American policymaker who thrives on real or perceived short-term gains. And what good is a politician if he or she is not in office?

But even more important than constituents, McCain-Graham must at all costs assuage the almighty security contractor. That McCain-Graham are calling for more troops in Afghanistan is not shocking whatsoever when one understands how their campaigns are financed.

McCain, for one, has been among the top four recipients of contributions from defense electronics and aerospace contractors, pulling in more than $435,000 since 2011, according to US Federal Election Commission data compiled by OpenSecrets.org. Graham is not far behind at just over $411,000, both illustrating that the threat posed to other nations by the US military-industrial complex is no conspiracy theory.

One might object and say this is nothing more than rationalization for lawmakers who knowingly do the wrong thing – who promote war for money understanding full well people will die just to get them reelected. And this may all be true. Of course, it is impossible to read their minds, but we can certainly see their actions.

One can conclude from their behavior – especially given the mountains of easily accessible objective evidence – that either they are being wholly dishonest or they are being victimized by a phenomenon Sartre had observed called “bad faith” – a paradoxical human capacity that affords the opportunity for self-deception. An ability unique to human beings that, we can only venture, enables politicians like John McCain and Lindsey Graham to consciously lie to themselves on a daily basis.