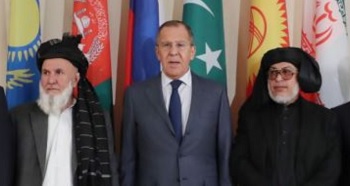 “We have no eternal allies, and we have no perpetual enemies.
Our interests are eternal and perpetual, and those interests it is our duty to follow.”

The Russian government escalated its involvement in the 21st Century’s version of the Great Game by hosting a Taliban delegation for talks in Moscow on November 9. The Soviet Union withdrew from Afghanistan in 1989 after a brutal and bloody war of nearly a decade and many Taliban, in fact, took part in the conflict as members of the mujahideen. Which is why the imagery of Russian Foreign Minister Sergey Lavrov hand-in-hand with long bearded Taliban mullahs discussing a road map for Afghanistan was a surreal sight to behold indeed.

On the one hand, Russia appears to be pushing the bounds of cynicism to entirely new levels by holdings talks with a group who were once their mortal enemies. However, Moscow usually acts based on sound strategic logic. Which begs the question: Why is Russia taking such risk?

Russia’s power move was met with a mixed reaction at home. The Pravda.Ru website ran a story with the headline: “Russian Foreign Minister negotiates with terrorists in Moscow.” That said, in the article itself Daria Mitina, a former Duma deputy whose grandfather, Mohammad Yusuf Khan, was the prime minister of Afghanistan in the mid-1960s, gave a sound explanation for why Moscow launched this bold initiative.

“One can negotiate with anyone, even with the devil himself. The main thing here is the goal. If the goal is to resolve the Afghan issue and establish peace in the country, then the talks are perfectly justifiable,” Mitina said.

Let’s consider some bottom line brute facts. First of all, a stable Afghanistan that is not an ISIS launching pad is in Russia’s best interests. Secondly, the United States has not had ANY success in bringing the key stakeholders together. Plus, Moscow has better relations with players in the region.

Two journalists who witnessed the anti-Soviet jihad in action as the first Western journalists the Afghan communists let in the country during the 1980s, Elizabeth Gould and Paul Fitzgerald, echoed this sentiment.

“Bottom line is that Russia has nothing to lose by talking directly to the Taliban, especially since Pakistan is now growing closer to Moscow because of the Shanghai Cooperation Agreement,” Gould and Fitzgerald told Afghan Online Press (AOP). “There’s a high degree of inevitability here.”

Underscoring this point was the reaction in Pakistan. The Editorial Department of Pakistan Today had this to say about the Russian-Taliban talks:

“Moscow has been more successful in one try than the Americans, and their allied stakeholders, have been in almost two decades,” the editorial team said in an article published on November 11. “Already a trend has come to the fore; one that, if dealt with in the right spirit, might just ensure some progress in terms of ending the war.”

Russian diplomat Zamir Kabulov sounded like the insurgents’ spokesman in comments directed at Washington after the meeting in Moscow.

“They [the Taliban] said that they would be ready to talk with the Afghan government only after reaching an agreement with the Americans on the schedule for withdrawing all foreign troops from Afghanistan,” Kabulov said at a press conference.

From a realist perspective Russia can use this as a pressure point against the U.S. If the U.S. pushes aggressively on Ukraine or Syria, Moscow can complicate things for the U.S. in Afghanistan.

There is a downside to playing this type of game, however. Moscow, for one, risks giving the Taliban even more undue legitimacy on the international stage. And, albeit a Western puppet, Kabul appears to not want to play ball given it sent a non-governmental delegation to the proceedings.

Gould and Fitzgerald, although they think Russia’s involvement is a positive step, are still suspicious of the radical insurgent movement.

“We still believe and will continue to believe that the Taliban is an alien force imposed on Afghanistan by outside actors to destroy Afghan sovereignty,” the couple warned.

Not to mention a recent poll revealed that more than 80 percent of Afghans have zero sympathy for the Taliban cause. And many Afghans still hold a grudge over the war against the Soviet Union and have little appetite for Russia’s involvement.

And given the fact Taliban fighters continued to wage a deadly campaign as the talks were progressing in Moscow, it is hard to believe the delegation from Doha is capable of speaking on behalf of most members of the fragmented movement.

Moreover, there is the risk of blowback. The only difference between the Islamic State and Taliban is that ISIS seeks to establish its caliphate beyond Afghan borders. In short, who knows what the Taliban will do, as the former Duma official told Pravda.Ru.

“In general, Russia should view the Taliban as a real national threat,” Mitina concluded.