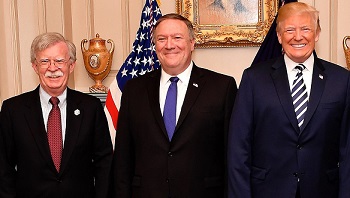 The International Criminal Court (ICC) denied a request to probe more than 1 million war crimes reportedly committed by parties to the conflict in Afghanistan because the court’s judges feared the long arm of the United States. After the decision was rendered the White House, adding insult to injury, gloated over its ability to force the ICC into abandoning justice and reminded the world that the United States is above the law.

The decision comes a week after the State Department revoked the visas of ICC Chief Prosecutor Fatou Bensouda and her staff. In March, Secretary of State Mike Pompeo threatened to take this action because the ICC was attempting to probe possible war crimes committed by U.S. military and intelligence personnel on Afghan territory since 2003 and in black sites around the world since 2002.

Put another way, instead of even considering cooperating with Bensouda, who initially requested the probe in 2017, the United States decided to treat the ICC chief prosecutor and her team as if they are the war criminals.

Moreover, prior to this, White House National Security Adviser John Bolton had repeatedly threatened to prosecute and sanction any ICC officials who dared to investigate the United States.

Although the Obama administration also hubristically opposed ICC probes, the Trump administration’s attacks on the court have pushed contempt for the institution to entirely new levels.

“We welcome this decision and reiterate our position that the United States holds American citizens to the highest legal and ethical standards,” President Donald Trump said in a statement after the announcement on April 12. “Any attempt to target American, Israeli, or allied personnel for prosecution will be met with a swift and vigorous response.”

Trump’s assertion that the United States holds its citizens to the “highest legal and ethical standards” is quite interesting especially with respect to the specific incidents in question because, to date, not a soul has been held to any standard.

First, let’s be clear – crimes were committed, U.S. Congress admitted as much. The U.S. Senate Select Committee on Intelligence in a 6,000 page report approved in 2012 acknowledged that American personnel committed torture between 2001 and 2006.

“Under any common meaning of the term, CIA detainees were tortured,” Senator Dianne Feinstein, the committee chairperson, said in a condensed version of the report released in 2014. “I believe the evidence of this is overwhelming and incontrovertible.”

However, not one single high-level U.S. official has been held accountable for any of the abuses committed during this period. Hence, outside of Israel, it is hard to believe that any country on earth takes the claim seriously that the United States holds its citizens to the “highest legal and ethical standards.”

ICC Pre-Trial Chamber in its ruling said that while there is reasonable cause to believe that possible war crimes had been committed Bensouda’s request was denied because there was little reason to expect cooperation from the authorities involved.

In essence, the ICC dropped the charges because the suspect involved refused to cooperate. This argument of course makes no logical sense which is why critics have perceived the ICC decision as blatantly allowing the United States to get away with murder, thereby undermining the court’s credibility.

“Coming so closely on the heels of a series of unhinged attacks by senior USA officials… the decision ultimately will be seen as a craven capitulation to Washington’s bullying and threats,” Amnesty International South Asia Director Biraj Patnaik said in a statement after the ruling.

The outrage is understandable especially considering that, according to AP, the ICC last year received 1.17 million statements from Afghans who say they were victims of war crimes at the hands of the Taliban, Afghan forces, terrorists, warlords, and international forces including U.S. personnel.

Then again, what options did the judges involved really have? It is easy for those who are not in Washington’s crosshairs to ridicule the decision. One can easily foresee the retaliatory measures the Trump administration would inflict.

Hence, disgust and rage should be directed towards the United States, not the court. U.S. officials are acting no differently than many of the authoritarian regimes they repeatedly condemn.

The role of the ICC is to step in when nation-states fail to hold their own accountable for egregious violations of international law. Putting aside the fact the United States is not party to the Rome statute, which established the ICC in the first place, the U.S. utter failure to hold anyone accountable for crimes related to the war on terror makes this specific case ideal for the court to probe.

With respect to this specific criminal case, however, we are not dealing with your typical suspect. We are dealing with a powerful suspect – a dangerous unchecked rouge state, in fact – and one that just set a new precedent by overruling the court.