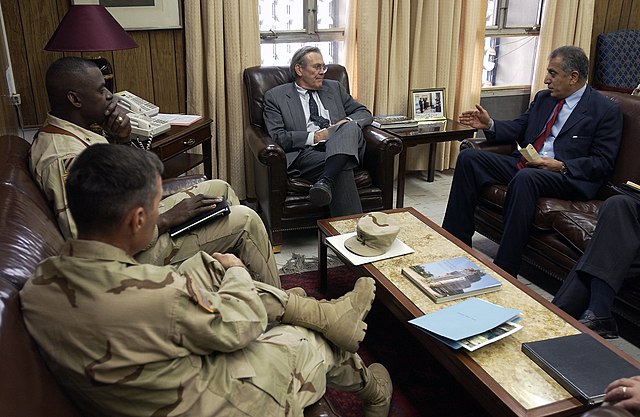 “The bulk of this country today is permissive, it’s secure,” Rumsfeld told reporters during a visit to Kabul on May 1, 2003.

The Taliban, as we all know, would resurge in less than two years. Today, almost two decades after the post-9/11 takedown, the insurgents are well-positioned to take over the country with the U.S. military nearly fully extracted, a defeated giant. Now, all major U.S. combat operations are over – but for much different reasons than Rumsfeld could fathom.

The legacy of Rumsfeld, who passed away on Wednesday, June 30, is still being felt in Afghanistan, whose culture and history do not even fit into one of the infamous Rumsfeldian epistemic categories. They weren’t so much “unknown unknowns” but issues they did not even care to know about in the first place. They were, in the short-term, inconvenient to the master plan, which was moving on to the next war.

Rumsfeld, in reality, had lost interest in the Afghan war once the Taliban were ousted. A pivot to Iraq was in order because in Afghanistan, according to Rummy, “there was nothing left to bomb.”

This seeming lack of interest in pursuing those who actually attacked the United States on September 11 is just one of the many of his fatal policies and attitudes that continues to haunt both Americans and Afghans to this very day.

The two-time U.S. defense chief wanted to target Iraq immediately after 9/11, despite all signs indicating the culprits – al-Qaeda – were ensconced in the Afghan-Pakistan border regions.

In fact, Rumsfeld allegedly began shifting military and intelligence assets away from Afghanistan as early as November of 2001 because he felt Iraq was a better testing ground for advanced light-footprint, high-precision, high-tech, high-mobility military theories, models, tactics and weapons. It seemed this was the priority – not al-Qaeda.

Rummy felt his job was to kick out the Taliban and move on – things such as legitimate political solutions were, at most, an afterthought.

But the U.S. did not simply come in and topple the Taliban. They empowered warlords to do so as part of the strategy devised by Rumsfeld. And as one official put it “there was no one in Rumsfeld’s office who made policy except Rumsfeld” on Afghanistan or anything else.

The Pentagon green-lighted the CIA “warlord strategy,” which consisted of arming and giving cash to any strongman or miscreant who vowed to fight the Taliban, with no thought into how it might affect the precarious tribal-ethnic balance. This, above all, sowed the seeds for a Taliban comeback (outside of Washington strong-arming Karzai into office).

The former defense chief’s few good instincts include his reluctance to jam democracy down Afghan throats and his aversion to doling out reconstruction dollars, which turned out to be prudent given the billions wasted due to corruption.

And occasionally there were surprising public moments of self-introspection and even questioning the very heart of the war on terror.

“Are we [the United States] creating more terrorists than we’re killing?” Rumsfeld posited rhetorically regarding the status of the conflict in Iraq.

These were overshadowed, however, by his lack of care about and/or alleged support for the mistreatment of locals and neglect for the laws of warfare. A 2005 Human Rights Watch report even recommended opening a war crimes probe against him.

“Rumsfeld created the conditions for U.S. troops to commit war crimes and torture by sidelining and disparaging the Geneva Conventions, by approving interrogation techniques that violated the Geneva Conventions as well as the Convention against Torture, and by approving the hiding of detainees from the International Committee of the Red Cross,” the report said. “From the earliest days of the war in Afghanistan, Secretary Rumsfeld was on notice through briefings, ICRC reports, human rights reports, and press accounts that U.S. troops were committing war crimes, including acts of torture. However, there is no evidence that he ever exerted his authority and warned that the mistreatment of prisoners must stop. Had he done so, many of the crimes committed by U.S. forces could have been avoided.”

Rumsfeld is quoted in the report as saying: “These events occurred on my watch. As Secretary of Defense I am accountable for them. I take full responsibility.”

Yet taking full responsibility did not entail any negative ramifications for Rumsfeld personally, which, of course, is unsurprising (and, to be sure, the same could be said for any officials under the Obama administration guilty of similar transgressions).

But there does not seem to be any regrets. There was never any indication from Rumsfeld until the day he died that he would do anything differently.

Even in the face of all these “known knowns.”