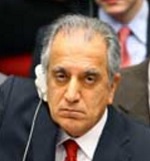 Captain obvious Zalmay Khalilzad told the U.S. Foreign Affairs committee on July 12 that Pakistan was using the Taliban as a proxy force to dominate Afghanistan. Besides revealing a phenomenon few people outside of Pakistan would deny, Mr. Khalilzad’s testimony dripped with irony considering both the Taliban movement and its patrons in Islamabad were once his close co-conspirators and allies.

Although today Khalilzad, a native Afghan who became an American citizen and Reagan cowboy neoconservative, calls the Taliban “terrorists” he previously considered them business partners that were misunderstood by the international community. During the 1990s Zalmay played the role of “key interlocutor” between the Taliban government and the Houston-based UNOCAL oil company in discussions about a trans-Afghanistan gas pipeline. As a paid consultant for UNOCAL he lobbied the U.S. government for a more “sympathetic” policy towards the Taliban and went out of his way to characterize the Islamic movement in the most favorable terms possible.

In 1999, Khalilzad was quoted as saying that in Afghanistan’s rural areas “what the Taliban is seeking to impose is not very different than what the norm has been.” Three years prior to that, in a Washington Post op-ed, Khalilzad argued that it was time for the United States to “reengage” and even recognize the Taliban regime as a legitimate government because they did not espouse “the anti-U.S. style of fundamentalism practiced by Iran.” Taliban leaders would, of course, go on to show the world that they were much more sadistic than the diabolical Shia mullahs in Tehran ever were.

Even more vividly, Khalilzad was once spotted at a luxury Houston hotel, “chatting pleasantly over dinner with leaders of Afghanistan’s Taliban regime about their shared enthusiasm for a proposed multibillion-dollar pipeline deal.” This is the same Taliban, mind you, Zal now wants Pakistan to hand over on a silver platter.

Not only did Khalilzad once operate as the Taliban’s goodwill ambassador, he also embraced Pakistan as an ally during the jihad against the Soviet Union during the 1980s in joint efforts to back the Afghan mujahideen, the Taliban’s predecessors. Back then, of course, they were called “freedom fighters,” despite the fact many of the mujahideen factions were led by radical Islamists and war criminals. Chief among those Khalilzad supported included an infamous then-freedom fighter, now-U.S.-designated terrorist. Journalist Arthur Kent captures the situation eloquently in a 2007 piece published in e-Ariana:

“When Khalilzad served the Reagan administration in the 1980’s, he backed anti-Soviet Afghan resistance figures of his own Pashtun ethnicity – despite their extremist views,” Kent writes. “He [Khalilzad] favored fundamentalists like Gulbuddin Hekmatyar, and allied himself to Pakistan’s campaign against the Afghan nationalist leader, Ahmed Shah Massoud, an ethnic Tajik.”

Beyond his hypocrisy vis-à-vis the Taliban and Pakistan, Khalilzad has had a destructive influence on Afghanistan’s political, economic and social development. As U.S. envoy to Afghanistan he was a key player in seating George W. Bush administration favorite Hamid Karzai as president at the decisive 2002 Loya Jirga. Zal strong-armed King Zahir Shah aside, installed Karzai and helped award ministry posts to warlords and war criminals. It is important to underscore that Zalmay did not support Karzai because he was the best man for the Afghan people, but because he was the best man for Khalilzad’s wallet via the aforementioned golden pipeline, as Marc Erikson explains at Asia Times Online:

“One further thing both men [Khalilzad and Karzai] have in common is that in 1996-1997 they advised American oil company UNOCAL on the $2 billion project of a Turkmenistan-Afghanistan-Pakistan pipeline,” Erikson claims.

Not only that, Khalilzad became a true American warmonger who showed little empathy for the host-nation during military operations – even when said nation was his own homeland. After U.S. war planes wiped out an Afghan village during the post-9/11 bombing campaign, Khalilzad coldly rejected any notions of halting the attacks – not until the ultimate objective was met – which, of course, is not clear to this day.

“We [the United States] do not target civilians, but civilians unfortunately do get affected, even killed. War is a very imperfect business,” so said King Zal.

Kent aptly describes Khalilzad as an “activist-envoy” whose career has revealed two constants: “a genius for advancing himself by way of influential connections; and a penchant for policies that sooner or later reveal their author’s knack for blowback.” Afghan parliament member Ramazan Bashar Dost summed up Zal’s escapades most brilliantly: “The role of Khalilzad in Afghanistan is like a poison that has no treatment.”

This is not to say that Khalilzad’s prescriptions to counter Pakistani duplicity are not worth considering. The problem is, it is hard to trust a man with such a long track record of playing double games of his own – games that serve the interests of King Zal and not those of the Afghan people.