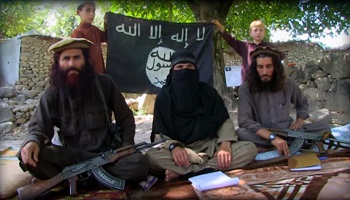 ISIS appears to be growing stronger and expanding across South Asia in a bid to transform itself into a global terror operation after losing its territorial caliphate in Syria and Iraq. Meanwhile, in Washington the political class is spending time and resources on all the wrong “security” issues while the governments in Pakistan, India and Afghanistan also appear to be asleep at the switch.

The phenomenon highlights the inefficacy of counterterrorism efforts conducted by the United States and other governments in the region in addition to casting doubts on previous claims of progress.

As far as Afghanistan goes, Russian military officials are saying that ISIS now has about 6,000 fighters inside the country, tripling in size since 2016 – entirely contradicting Pentagon estimates. Meanwhile, ISIS said it has established new wilayats in Pakistan and India – which comes in the wake of a string of successful attacks across South Asia.

“The situation in Afghanistan continues to deteriorate. The country may become a new refuge not only for IS terrorists, but also for other terrorist organizations, from where they will travel throughout the Eurasian continent,” Commander of Russia’s Central Military District Col. Gen. Alexander Lapin told defense industry leaders at a meeting in Yekaterinburg on Wednesday as quoted by Sputnik. “In Afghanistan, the number of IS terrorists has increased threefold compared to 2016.”

The U.S. Defense Department has repeatedly put the number of ISIS fighters in Afghanistan at around 2,000 to 2,500 – although there were signs that the estimates may have been flawed. Last June, as AOP noted, citing the Washington Times, a U.S. State Department official under the cloak of anonymity broke ranks and admitted that ISIS had grown stronger in Afghanistan “despite a really withering military campaign,” by American and Afghan forces.

The U.S. and Afghan governments are not alone in failing to contain ISIS – Islamabad and New Delhi too appear incapable of preventing the terrorist entity from burgeoning and evolving.

On May 15, the Islamic State announced the creation of Wilayah Pakistan after claiming two attacks in Balochistan province, The Defense Post reported. The move came just five days after the group claimed to have established Wilayah al-Hind (India) after claiming an attack in Kashmir.

Previously, attacks were claimed under the name of IS-Khorasan, named after a historical area – the Greater Khorasan – which stretches across what is now modern Afghanistan, Pakistan, Iran and Uzbekistan.

“The restructuring of provinces by ISIS could be part of a broader push to reinforce its capabilities and present its strength as a global terror organization following the loss of territory in Iraq and Syria,” the Defense Post’s Robert Postings wrote on May 15.

In the wake of the Easter bombings in Sri Lanka, two analysts explained that the group has been morphing into exactly that.

“The Sri Lanka attacks further demonstrate the change in the Islamic State from a territorial group to a sponsor of terrorism worldwide,” Harsh V. Pant and Kabir Taneja from the Observer Research Foundation in New Delhi wrote in Foreign Policy.

The timing of the restructuring is interesting considering on May 14 the UN Security Council in a statement said it added IS-Khorasan as a new entity to its terror listing. The State Department welcomed the move and said the Khorasan group is the first ISIS affiliate to be designated by the United Nations, which means all member states – per the UN charter – are required to take steps to crack down on the entity.

“This UN designation obligates all member states to implement a travel ban, arms embargo, and asset freeze on ISIS-K, actions that will cut the group off from the resources it needs to continue its terrorist activities,” State Department spokesperson Morgan Ortagus said in a release on May 15.

In Afghanistan and Pakistan, experts have seen the growth of ISIS as primarily the result of desertions from Taliban forces. However, ISIS may see an opportunity to draw new recruits from populations residing in the tension-filled regions of Jammu and Kashmir.

Rita Katz, director of SITE Intelligence Group, observed that ISIS is announcing the India and Pakistan branches, along with new provinces in Central Africa and Turkey, just as the group circulates a video of its leader Abu Bakr Al-Baghdadi, claiming he is still alive. Katz said that while it is tempting to roll our eyes at these developments, they may resonate.

“To jihadists in these vulnerable regions, [these] are significant gestures to help lay the groundwork in rebuilding the map of the ISIS’ ‘Caliphate.’ Thus, these regions should be closely watched,” Katz said in a Twitter post on May 10.

These developments should also force some soul searching in the Trump administration, which seems hyper-focused on starting a war with Iran and Venezuela.

Meanwhile, U.S. lawmakers, when not obsessing about how to impeach Trump are too busy spending millions to “protect” U.S. election systems against foreign cyber monsters despite zero proof indicating that any alleged meddling changed a single vote.

Moreover, domestic political corruption, voter registration fraud, and disenfranchisement of minority voters are bigger threats to the American democratic process than any foreign bogeyman. Hence, protecting the election process is not a national security issue – let alone a priority – especially when compared to halting the spread of ISIS.