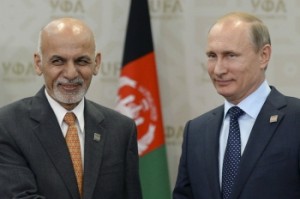 The recent upsurge of violence in Afghanistan, the exchange of words between the Afghan and Pakistan government coupled with the Russians poised to assist the Afghan regime, suggest that we may be approaching a turning point in the conflict.

In the last month, Kunduz was captured by the Taliban, and further skirmishes have ensued resulting in losses on both sides. According to the United Nations, insurgents now control more territory than at any other time since 2001. The Afghan government has once again asked the Pakistan government to take a more robust approach to confronting the Taliban in their soil, where they regroup and re-enter Afghanistan.

In response, Prime Minister Nawaz Sharif stated that Pakistan could not bring Taliban to the negotiating table and be asked to kill them at the same time; either he can pursue a military solution or a political solution, but not both. It does sound like a valid argument. However, the Afghan government replied that Pakistan should engage in dialogue with the Taliban faction who accept the Afghan constitution and lay down arms; otherwise, they should be treated like terrorists. Hence, one spokesman said, “Pakistani government should deal with the Taliban in line with the same interpretation they have set against any terrorist activities on their own soil.”

The Taliban as an extension of Pakistan’s influence in Afghanistan has always been a sore point between the two nations. According to a set of documents released by WikiLeaks from the hacked personal email account of Central Intelligence Agency (CIA) director, John Brennan, Pakistan uses proxies to counter India’s growing influence in Afghanistan. He blamed Pakistan for the failure of the US policy to eradicate the Taliban from Afghanistan, he wrote, ‘Coalition forces have won every major battle with Afghan insurgents, but these tactical successes have not resulted in a strategic victory, largely because insurgents are free to regroup in sanctuaries across the Afghanistan-Pakistan border.’

With the failure of the Pakistani regime to bring the Taliban to the negotiating table and the withdrawal of US-led troop continues, there will be a need for the fragile Afghan government to ask for outside assistance. Furthermore, apart from the reinvigorated Taliban, the situation will worsen as ISIS (the Islamic State of Iraq and Syria) expands inside Afghanistan and Pakistan. Therefore, the Afghan government has asked Russia for assistance, and no doubt Putin’s recent intervention in Syria has given impetus to this move. President Ashraf Ghani has asked Moscow for artillery, small arms and Mi-35 helicopter gunships, as the U.S. and its allies pulled most of their troops from Afghanistan and reduced financial aid.

It seems Russia is seizing the opportunity. In a recent summit of regional Asian leaders in Kazakhstan, Putin has already warned that he was ready to aid the effort to prevent Islamists from destabilizing Central Asia. Another US ally, Pakistan has bought four chopper gunships from Russia. As Lord Palmerston, the English Statesmen once said, “Nations have no permanent friends or allies only its interests.”

Many will recall that the Russians got bogged down in Afghanistan in the Soviet-Afghan war, during which Washington backed the fighters who would eventually become al-Qaeda. Now the Russians maybe coming back to aid the Afghan regime to combat the remanents of al-Qaeda, the Taliban and ISIS. The question is how far the Russians will go. Unless the threat grows substantially from the insurgents, it is unlikely that the Russians will commit ground troops to a full-scale invasion, its costly and experience has shown this does not get a favorable outcome in Afghanistan. For the foreseeable future at most they will continue to provide military, intelligence and logistics support. However, this may also have the potential for another confrontation with Washington, which are are already strained over Ukraine and the Middle East policy.

Yamin Zakaria is the author of Suicide Bombings – Jihad or Terrorism?, published by AuthorHouse UK.