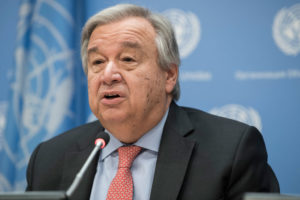 The Taliban continuing attacks amid the coronavirus outbreak reveals not only a total disregard for life but a suicidal mentality given all of humanity’s real enemy is an invisible indiscriminate killer – it chooses no sides, sees no jersey colors.

An escalation in Taliban attacks comes just as the rest of the world is at least toying with the idea of reducing violence. On Thursday, April 30, UN Secretary-General Antonio Guterres announced that hundreds of entities – from nation-states to rebel groups – have agreed to adhere to an international cessation of hostilities to help contain a pandemic that has killed over 233,000.

“We appealed for a global ceasefire so that the world can face together our common enemy: COVID-19,” Guterres said during a virtual press conference. “The cease-fire call has resonated widely, with endorsements from 114 Governments, diverse regional organizations, religious leaders and more than 200 civil society groups spanning all regions. Among all those, there were 16 armed groups.”

Guterres said in Afghanistan the United Nations is “pushing hard for a humanitarian cease-fire between the Government and the Taliban.”

According to the UN, developing countries are especially at risk, given fragile healthcare systems and lack of capabilities to fight the disease. The virus need not kill and harm directly, the indirect consequences could be even more lethal, as Guterres suggested, especially for those facing the most acute economic devastation.

Poverty, for the first time in three decades, could rise by 500 million people while the equivalent of 300 million jobs are likely to be lost as a result of the pandemic, the Secretary-General said. In addition, he warned, millions of children are at risk of missing life-saving vaccines.

After the event, the New York Times, citing an informal tally kept by the UN, reported that the 16 armed groups mentioned are based in Yemen, Myanmar, Ukraine, Philippines, Colombia, Angola, Libya, Senegal, Sudan, Syria, Indonesia and Nagorno-Karabakh. It says a lot about this pandemic that even violent insurgents are willing to put down arms to fight COVID-19.

The war in Afghanistan is exacerbating the crisis by diverting valuable time, funding and resources away from fighting the disease. Just as a coordinated, strategic approach is required, the parties to the conflict are failing to take the risks seriously.

One Afghan troop told journalist Ezzatullah Mehrdad that the fatality rate from the “Taliban virus” is still much higher than that of COVID-19. Mehrdad of course bemoaned this attitude among the combatants.

“You cannot shoot the coronavirus, target it with explosives, or dispatch a suicide bomber to hit it. Yet even while the invisible enemy, COVID-19, is spreading fast in Afghanistan, so is the war,” Mehrdad said in a piece for The Diplomat published on April 30. “Despite international humanitarian calls for a ceasefire that would allow the government and the Taliban to join forces to handle the pandemic, the Taliban continue attacking Afghanistan’s security forces on different fronts, mostly in rural areas.”

The data supports the journalist’s concerns. On April 27, a new report from the UN Assistance Mission to Afghanistan (UNAMA) revealed that 533 civilians – including 150 children – were killed in the first quarter of 2020.

“The report tracks a disturbing increase in violence during March at a time when it was hoped that the Government of Afghanistan and the Taliban would commence peace negotiations, as well as seek ways to defuse the conflict and prioritize efforts to protect all Afghans from the impact of COVID-19,” UNAMA said in a statement.

These developments also smash any delusions that the U.S.-Taliban peace deal signed in February would prove to be any panacea. Mehrdad noted that the insurgents have launched on average 50 attacks per day since the public signing ceremony. He also said 25 to 40 Afghan troops have been killed on a daily basis over the course of the previous two weeks.

“What has changed since signing a deal with the U.S. is that the Taliban aren’t publicizing the casualties of Afghan forces as extensively on their social media pages, despite killing a record number of them,” the journalist said.

Guterres during his virtual presser expressed some audacious aspirations on what the COVID-19 recovery process could do for developing countries. He said it will be an opportunity to address the “fragilities, inequalities and gaps in social protection that have been so painfully exposed,” by the crisis.

“Let me recall Jean Monnet’s famous words. This is not a time for blind optimism or paralyzing pessimism. Now is the time to be determined. Determined to defeat COVID-19 and to emerge from the crisis by building a better world for all,” the UN chief said.

In Afghanistan, paralyzing pessimism would be an improvement among actors determined to do exactly the wrong thing. Apparently, now is always the time for raw cynicism by those whose thirst for power is so great they are willing to sacrifice everyone – including themselves.