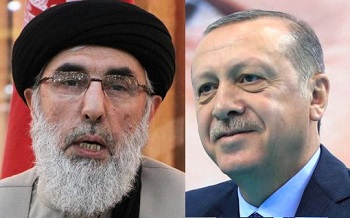 Turkey-hosted discussions between members of the Taliban and Hezb-i-Islami Afghanistan (HIA) – the political party founded by notorious Afghan warlord Gulbuddin Hekmatyar – underscore the reality extremists are trying to hijack the peace process. Although Kabul and even Taliban central downplayed the proceedings, the development marks a step backwards in the quest for a legitimate political solution to the conflict.

On Monday, President Ashraf Ghani’s spokesman Shahussain Murtazawi said the individuals who met with Taliban members over the past three days in Istanbul, “do not represent the Afghan government,” – an announcement that likely triggered a collective sigh of relief among most Afghans.

Mawlawi Abdul Rauf, a governor during the Taliban era, after meetings with Afghan officials on Sunday told Tolo News that he was sanctioned to speak on behalf of all the movement’s factions.

“We represent the overall Taliban [members] of the Islamic emirate, except some individuals who are not willing to opt for intra-Afghan peace talks and who want to talk through Americans,” Rauf said in an interview from Turkey.

Humayun Jarir, Hekmatyar’s son-in-law, claimed the talks are unofficial but can pave the way for official negotiations. In addition, Aminullah Muzzaffari, a spokesman for the Afghan High Peace Council, said they hope the meetings “will open the door to future talks.”

Jarir also claimed the Taliban members that were present at the meeting represented the Quetta Shura, the Haqqani Network and other of the movement’s factions.

Yet Taliban spokesman Zabihullah Mujahid in a Twitter post refuted Rauf’s claims and denied that talks involving representatives of the insurgent group were taking place, the New York Times reported. The public spat provided yet more evidence that the Taliban are nothing more than a collection of disparate factions and not a single coherent movement.

A source close to the Taliban told Pajhwok Afghan News that the most recent session was organized as a result of Hekmatyar’s visit to Turkey. The problem with HIA’s presence in the negotiations, however, was spelled out in the Times report.

“Although the faction [HIA] fought against the Taliban and against the government previously, it was the first Afghan insurgent group to enter peace talks with Kabul, and it shares many ideological similarities with the Taliban,” the report said.

During the interview with Tolo News, Rauf cryptically mentioned that the Afghan government has shown “more flexibility” to Taliban demands, without specifying which demands Kabul seems more amenable to. Demanding the exodus of U.S. forces is one thing, for example, but what if they discussed issues like countrywide implementation of Taliban-style sharia law?

The government may have denied the legitimacy of the talks but the incident seems somewhat suspicious given Ghani last week pardoned 75 prisoners loyal to Hekmatyar.

The talks also come on the heels of reports that the Turkish government offered to open a Taliban office in Ankara, which is also foreboding considering Turkish President Recep Tayyip Erdogan is a hardcore Muslim Brotherhood zealot who has more in common with ISIS than the people of Afghanistan.

In fact, Erdogan has both ideological and business ties to ISIS, as Moscow revealed during a row with Ankara in 2015 after Turkey shot down a Russian jet. Russian Foreign Minister Sergey Lavrov told his Turkish counterpart, Mevlut Cavusoglu, that there is clear documentation highlighting Erdogan and his family’s involvement with ISIS oil smuggling operations.

The Turkish government has been active in building ties with Hekmatyar and his henchmen. In February, a Hizb-i-Islami delegation reportedly visited Turkey at the invitation of Erdogan. According to Pakistan media, Erdogan wanted to personally welcome Hekmatyar immediately after the warlord was allowed to return from exile.

Erdogan’s influence within Afghanistan was also highlighted by the detention in December of Afghan-Turkish teachers linked with the Hizmet movement, founded by cleric Fethullah Gulen, whom the Turkish government claims was behind the 2016 coup. Hence, it is highly likely Turkey is hosting talks as another means to gain even more influence to achieve its own objectives inside Afghanistan.

Moreover, the reality is that an extremist foreign government hosting deliberations between extremist factions is obviously going to yield an extremist political agenda and one that does not serve Afghan interests.

To be sure, the war in Afghanistan will never end if parties to the conflict never talk, but the approach taken by the Afghan government and foreign powers like Qatar, Turkey, Pakistan and the United States, will not yield the desired results.

It is time for the government to find legitimate indigenous interlocutors capable of representing Afghanistan’s broad ethno-sectarian spectrum, including members of civil society, to develop a road map towards peace.

Militants and extremists backed by foreign actors on both sides of the Afghan conflict, unfortunately, seem to be the most eager to jump-start the process – most of whom are more interested in seizing power purely for the sake of wielding it than they are in finding an inclusive political solution that can yield long-term stability.