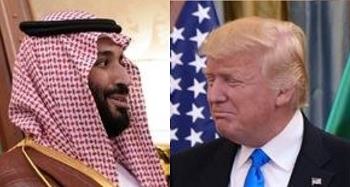 There is clear evidence based on declassified publicly available U.S. intelligence reports that Saudi officials were directly involved in the funding, plotting and orchestration of the terrorist attacks against the United States on September 11, 2001. No member of the Saudi royal family, however, has yet to face a tribunal – or any type of accountability – for crimes against humanity that killed more than 3,000 people. Yet one Washington Post journalist is assassinated and suddenly hypocritical politicians across the globe want Saudi Crown Prince Mohammed bin Salman (MBS) dragged in front of The Hague.

On Wednesday, November 28, Argentine federal prosecutor Ramiro González based on a complaint filed by Human Rights Watch (HRW) began looking into the crown prince’s possible responsibility for war crimes in Yemen and his involvement in the October murder of journalist Jamal Khashoggi at the Saudi consulate in Istanbul.

HRW Executive Director Kenneth Roth had the audacity to warn MBS he should fear ever leaving Saudi soil because “the reach of justice is long.” Roth was hoping that Argentine authorities would nab the crown prince while he was in Buenos Aires attending the G20 summit on November 30 and December 1.

Taken in isolation, in principle, MBS should absolutely face justice for his alleged involvement in the horrendous torture and murder of civilians from Saudi Arabia to Turkey to Yemen and beyond. Yet, if we apply such a standard, at the top of any war crime prosecutor’s list should be the leaders of the very countries calling for sanctions against the Saudis.

Chief among these violators are alleged human rights champions like the United States and many of its Western allies who are responsible for atrocities in places like Afghanistan, Iraq, Libya, Syria, and Mali.

In addition to MBS, for example, why didn’t HRW ask Argentina to arrest U.S. President Donald Trump for fresh war crimes in Afghanistan? The UN, citing information from local authorities, reported that U.S. airstrikes killed 23 civilians – including 10 children and 8 women – in Afghanistan’s Helmand province on November 28. In other words, the very same day Argentina launched a war crimes probe against the House of Saud.

The UN mission also said 649 civilian casualties were recorded in Afghanistan in the first nine months of 2018 – the highest level for any such period since they began tracking the figure in 2009. This increase, by the way, by no coincidence comes in the wake of Trump’s decision last August to boost airstrikes and loosen rules of engagement – both recipes for more civilian deaths.

In addition, the Pentagon recently intensified targeting of buildings in Afghanistan, a practice the military tried to get away from because of the higher likelihood of collateral damage. The UK-based Bureau of Investigative Journalism reported that in October alone U.S. military aircraft bombed more than 60 buildings, a number Larry Lewis from the U.S. Center for Naval Analyses put into perspective.

“Destroying 60 buildings in a month means that twice a day, international forces are conducting the riskiest kind of strikes for civilians: structures where there is uncertainty of who may be inside them,” Lewis said in the report.

Evincing, one could argue, the same type of callous disregard for civilian lives the Saudi-led coalition has displayed in Yemen. If someone should object by claiming the Saudis have been even more reckless by targeting hospitals, need we point to just as reckless U.S. operations like strikes on a Kunduz medical center that killed 40 innocents in 2015?

Which brings up another point: Trump is not the biggest culprit even among recent U.S. administrations when it comes to war crimes. According to a Brown University report released on November 21, up to around half a million people have been killed in U.S. post-9/11 wars in Iraq, Afghanistan, and Pakistan, including more than 266,000 civilians.

To be sure, Saudi forces under the crown prince’s command are committing war crimes as I write this. The Saudi-led coalition bombing campaign in Yemen, per a UN report, is responsible for 17,000 civilian casualties since it was launched three years ago including 6,600 deaths. By any measure, these are gross, inexcusable and unacceptable violations of human rights and international law. Yet, so is killing more than 266,000 civilians.

To be sure, all evidence points to the fact that it is highly likely MBS ordered the brutal torture and assassination of Khashoggi, which is horrendous. Yet equally horrendous is the fact JFK likely ordered the assassination of the president of South Vietnam. Obama had a U.S. citizen in Yemen vaporized for palling around with terrorists. So much for due process. As Noam Chomsky once said, if the Nuremberg laws were applied consistently every U.S. president after World War II would have been hanged (and spare me the charge of “whataboutism” which is usually the last refuge of someone who hates the truth).

This all raises a very interesting question: Does MBS have any more blood on his hands than Trump, Obama or Bush? The truth is, all of these leaders should be held accountable for their horrific crimes. The unfortunate reality is, none of them will be.