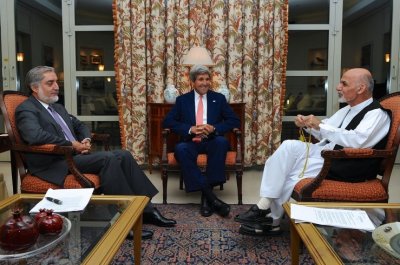 Convening a Loya Jirga, as some Afghan figures have called for recently, is a proper and fitting mechanism for remedying Afghanistan’s political gridlock. That the U.S. is opposed to this solution is not too surprising given indigenous governing mechanisms are antithetical to Washington’s mission to democratize the world, Jeffersonian style. However, Afghans should still be on high alert because if U.S. officials cannot stop the Loya Jirga, they will attempt to hijack it.

U.S. Secretary of State John Kerry showed up unannounced in Afghanistan last week to inform Afghan President Ashraf Ghani and CEO Abdullah Abdullah that they should not hold a Loya Jirga while the country suffers under dysfunctional governance borne of political uncertainty. This despite the fact that an agreement Kerry himself brokered in 2014 stipulates that a jirga be held in September 2016 if the political impasse persisted.

On Saturday, Kerry tried to justify U.S. opposition to the Jirga during a joint press briefing with President Ghani, although his explanation was completely devoid of logic.

“Now, the agreement did mention the effort to try to have the potential of a Loya Jirga at some point within two years. That was a goal,” Kerry noted. “But it is our [U.S.] understanding that that is a mandate for five years and there’s no termination whatsoever in six months.”

Come again? The United States obviously does not want some ancient tribal institution, regardless how sacrosanct in Afghan eyes, to supersede the results of the modern occidental electoral system they forced down Afghanistan’s throat, despite the ballot box having zero precedence in how Afghans have historically chosen leaders.

Of course, some Afghan politicos would not abide Kerry’s cognitive dissonance. Afghan Senate House Chairman Fazal Hadi Muslimyar said it was shameful for a foreigner to dictate the manner in which the Afghans are to decide their own fate, calling it “clear interference in the internal affairs of Afghanistan.”

On the other hand, the holding of a Loya Jirga has not always been a panacea to Afghanistan’s political ills, and has often been exploited to lend the veneer of legitimacy to unpopular decisions. To be sure, it was used successfully to found the modern state of Afghanistan in 1747, when Ahmad Shah Durrani was declared Father of the Nation and the country’s first king, but other regimes have abused it.

In 1928, for example, King Amanullah tried to get radical reforms approved by a loya jirga of some 1,000 tribal and religious leaders, but when that failed he convened a smaller Jirga of 100 loyalists who “rubber-stamped” these measures. In the event, the unpopular measures were never implemented and Amanullah was eventually exiled. Afghan communist leaders tried to use the Jirga to sanctify their rule, which only delegitimized and undermined the credibility of the tool itself.

However, the most pivotal and decisive Loya Jirga, and for our purposes the most relevant, held in the past half century took place in 2002, which the U.S. stole to crown Hamid Karzai as president of Afghanistan. Karzai was seated despite the fact 900 of 1,300 elected delegates chose to restore King Zahir Shah, who was strong-armed aside as the penultimate act of the Bonn Process, an effort led by a native Afghan turned American neoconservative capitalist cowboy, Zalmay Khalilizad.

Chris Mason, who served as a U.S. State Department political officer on the Pakistan-Afghanistan border, wrote about the fateful 2002 jirga in The Military Review, the U.S. Army’s very own think tank magazine. He described the Bonn Process as a CIA “stage play” rigged by the U.S. to “put our man Karzai in office.” Mason elaborated:

“In 2002, three-quarters of the participants in the Emergency Loya Jirga signed a petition to make the late King, Zahir Shah, the interim head of state, an inconvenient show of reverence for the monarchy, which required an extraordinary level of covert shenanigans to subvert,” he claimed. “Even a ceremonial monarchy would have provided the critically needed source of traditional legitimacy necessary to stabilize the new government and constitution.”

It was America’s post-9/11 “original sin” that ended up leaving Karzai to be perceived as a modern-day Shah Shuja, a puppet king enthroned by the Western powers. Not to mention the U.S. helped facilitate the distribution of ministry posts to northern warlords in a Faustian bargain for their help in toppling the Taliban. Fast forward to today, and here we have a U.S. diplomat, monsieur Kerry, meddling in Afghan affairs and trying to play kingmaker yet again, albeit this time attempting to prevent a Jirga.

Mark my words, the U.S. will not sit by and watch their democratizing state-building agenda go up in smoke should the Afghans hold the Jirga in September. As sacred an institution as the Loya Jirga is, it is vulnerable to manipulation by the proxies of external powers, most notably the United States and Pakistan, who will probably try to sponsor a delegation from the Haqqani Network to participate.

If the Afghans decide to go the jirga route to resolve their current political tumult, a few guidelines ought to be kept in mind: beware of warlords and Western interlopers, include legitimate traditional tribal elders, ensure it is truly representative of the country’s ethno-sectarian makeup and inclusive of the younger generation – the future of Afghanistan – and, above all, do not allow the Americans to create the guest list.