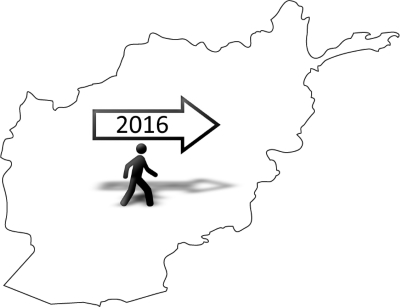 Looking back on 2015, except for the sporting success, there are not many reasons to feel optimistic about the future of Afghanistan. A resurgent Taliban continues to gain more territory, and even worse is the prospect of ISIS gaining a foothold, adding to the chaos. The fighting between the Taliban and the Afghan security forces is turning out to be the bloodiest on record since 2001; the civilian deaths have increased substantially with the Afghan security forces taking significant casualties. The backdrop to this is the US and NATO troops completing their evacuation, leaving behind a minimal presence of 10,000 troops and a fledgeling Afghan National Force. Afghanistan’s future remains precarious. Looking forward to 2016 and beyond, there many factors that will contribute to shaping the future of Afghanistan; the role played by the Global and regional powers, economic and social changes within, the exodus of the youth towards the West and globalisation in an ever shrinking world. The most important issues for Afghanistan will be security, political stability and the economy.

After incurring the cost of a post 9/11 invasion, is the USA going to be a spectator and watch Afghanistan descend into chaos with the prospect of the Taliban regaining power? Since the Afghan National Force looks incapable of dealing with the Taliban threat, one would have expected the US-led forces to find a permanent solution before making preparations for an exit. Perhaps, the US strategy along with the other global power of Russia and China is to compel the regional powers (Pakistan, India, Iran and the Central Asian nations) to take a greater role. Because they too have an interest in a stable Afghanistan for economic and security reasons, moreover the US no longer wants to bear the entire cost of the operation.

After the recent breakthrough with Iran, it may play a more assertive role in helping to contain the anti-Shia brigade of the Taliban and the ISIS, which in turn helps Iran to continue the path of rebuilding its relationship with the US. India will continue to foster a better relationship with the Afghan government to counter Pakistan-Taliban influence; however, it is unlikely to go beyond that and offer military assistance. Pakistan is facing problem within from the Pakistan-Taliban faction. Will they pursue a policy of cooperation with the Afghan government to contain the Taliban forces on both sides of the border? One would have thought by looking at the situation in Iraq and Syria under ISIS; both regimes would have tightened their resolve and cooperate to contain these forces of instability, Taliban, Al-Qaeda, and ISIS.

From the regional economic perspective, Central Asian countries such as Turkmenistan would naturally aid the Afghan government on security matters, particularly as it signed the recent deal to deliver gas through Afghanistan and Pakistan to India. This deal should generate revenue for all sides and it’s in everyone’s interest that the pipeline is not bombed. Other regional nations with China are also considering opening the Silk Road to promote trade. Thus, security would help to promote trade, and as some of the think tanks have already made the case that increase in regional cooperation on security matters will severely hamper the activities of Taliban and the likes. The Afghan government needs to reach out to the various countries,  and the regional and international organisation to increase its security.

In the ideal situation, political stability would be attained if the Taliban ceased their armed struggle and joined the peace process. Regardless, the existing government needs to show that it is inclusive and represents all the various ethnic groups along with protecting women’s rights by curbing the endemic violence perpetrated against them. In this regard, some progress has already been made last year with a few landmark rulings against the perpetrators that attacked women.  Another factor that plagues the Afghan political establishment is nepotism and corruption, during the reign of Hamid Karzai there were many allegations of financial mismanagement. It would be a significant boost for confidence if the current regime can show that this problem no longer exists.

Although elections are taking place with mass participation, a sign that people want democracy; however, it is still some way from developing into a fully functional modern democracy, the various institutions have yet to develop fully. There needs to be a concerted effort to develop a sense of Afghan national identity and citizenship that overrides the tribal affiliation along with sectarian outlook.

There is no doubt that internal conflict is holding back economic progress; the country is ranked 175th on the United Nations’ Human Development Index with a GDP of about $34billion. There is much potential for the state; experts believe Afghanistan has up to $3 trillion in untapped mineral deposits, confirmed by numerous geological reports from various sources.

Unemployment is around 34% and the exodus of its youth towards the West seeing a better life indicates that reality. To create jobs in the private and the public sector, there needs to be growth and that, in turn, requires better public infrastructure, eradication of corruption, better access to education and training, and ensure that the rule of law extends to all parts of Afghanistan.

Due to injection of foreign aid, the economy has improved since 2002, particularly the agricultural sector. On my visits to the local shops here in the UK, the number of products from Afghanistan has increased substantially over the last five years. As of 2007, the country’s fruit and nut exports were at $113 million per year, but according to an estimate, this could grow to more than $800 million per year in 10 years given sufficient investment. The country needs to attract foreign investment which would help the economy to move up a level; perhaps that would allow it to tap its natural resources and create a thriving manufacturing sector. If there is peace in the future, there is much potential for a tourism industry with its beautiful landscape and rich history.

2016 is a leap year and the superstitious nature in us hope that Afghanistan will make progress towards permanent peace after almost 40 years of conflict.