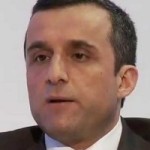 Tolo News: Afghanistan Green Trend (AGT), a social and youth empowerment organization, which is led by Amrullah Saleh, the former Directorate General of National Directorate of Security (NDS) and the first running mate to President Ashraf Ghani, on Tuesday said that it has referred at least 40 social media users to the Attorney General for “using insulting and abusive language” against Saleh.  But, NAI (an NGO supporting open media in Afghanistan) has described the move by the Green Trend as a violation of the law. “There is no space for repression in Afghanistan…” Click here to read more (external link).