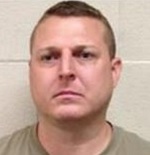 A US Army officer has been arrested for trying to kill Muslim worshipers and making death threats against members of a mosque in North Carolina before they were going to pray in observance of the holy Ramadan, authorities say.

US Army Reserve major Russell Thomas Langford also left bacon at the Masjid Al Madina in Raeford, Hoke County, a move which is regarded as an insult since Muslims are prohibited from consuming pork products.

The mosque members found two packages of bacon at the mosque entrance on Thursday evening, the sheriff’s office said.

The members spotted a Chevrolet Tahoe in the parking lot which apperantly belonged to 36-year-old Langford, officials noted.

One of the members left the parking lot for home, but noticed that the same vehicle was following him. The member tried to evade the car, but could not, the officials added.

Later, Langford returned to the mosque and made death threats against the members, one of whom was a retired Army captain and Muslim chaplain at Fort Bragg.

The chaplain invited Langford inside to talk, but he refused and left. He returned again in his vehicle and tried to run over a group of people who were going inside the mosque for evening Ramadan prayers.

“He tried to run me over … it’s sad – we bring children here,” said Mohammed Tareen a member at the mosque.

“This is very sad,” said an official at the mosque. “We don’t espouse that. We want to live in harmony. But this gentleman definitely has some issues and we hope that this is an isolated case.”

Ibrahim Hooper, spokesman for the Council on American-Islamic Relations, said “we have called for stepped-up police presence not only for that mosque but others in that state.”

“Every mosque all over the country has nightly Ramadan activities, so they’re vulnerable,” he said.

Langford faces charges ranging from ethnic intimidation, to assault with a deadly weapon, going armed to the terror of the public, communicating threats, stalking and disorderly conduct, the sheriff’s office said in a statement.

Firearms, ammunition and other weapons were found inside Langford’s car, according to the statement.