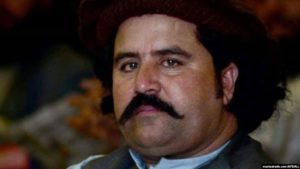 Sardar Arif Wazir, one of the leaders of the Pashtun Tahafuz Movement (PTM), was traveling by car in the city of Wanna when gunmen opened fire from another vehicle, RFE/RL’s Radio Mashaal reported late on May 1.

He was rushed to the hospital in the city of Dera Ismail Khan.

The attack comes after Pakistani police arrested Wazir on April 17 for delivering an “anti-Pakistan” speech during a recent visit to Afghanistan. He was released on bail two days before the attack.

Mohsin Dawar, a member of Pakistan’s lower house of parliament and a prominent figure in the PTM, accused “state-sponsored militants” of carrying out the attack.

“The masters of the attackers should know that bullets, injuries, and prisons can’t weaken our resolve,” he wrote on Twitter.

There was no immediate response from the government. No group has claimed responsibility for the attack.

The PTM has campaigned for civil rights for Pashtuns, the country’s largest ethnic minority, since 2018.

The group has attracted tens of thousands of people to public rallies to denounce the powerful Pakistani Army’s heavy-handed operations against militants in tribal regions that have killed thousands of Pashtun civilians and forced millions more to abandon their homes since 2003.

The PTM has been calling for the removal of military checkpoints in tribal areas and an end to “enforced disappearances,” in which suspects are detained by security forces without due process.

Pakistan’s government rejects allegations that its security forces and intelligence agents are responsible for forced disappearances.

Since the movement was formed in January 2018, international rights groups say authorities have banned peaceful rallies organized by the PTM and some of its leading members have been arbitrarily detained and prevented from traveling within the country. Some members have also faced charges of sedition and cybercrimes.

The Human Rights Commission of Pakistan (HRCP) has said the authorities have made allegations of anti-state activities “an expedient label for human rights defenders, particularly those associated with the PTM.”