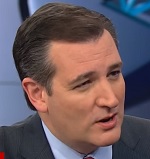 US Republican presidential candidate Ted Cruz has again called for authorities to step up their policing of Muslim neighborhoods in the United States.

In the wake of the deadly terrorist attacks in Brussels on Tuesday, Cruz proposed more resources for US police to “patrol and secure Muslim neighborhoods before they become radicalized.”

On Wednesday, Cruz doubled down on his call for authorities to monitor American Muslims, despite criticism from top law enforcement officials.

“We saw a horrific terror attack in Brussels and our prayers this morning are with the families of those murdered, of those wounded,” Cruz said during an interview with “CBS This Morning.”

“But what is important is that was not a lone wolf, that wasn’t an isolated attack. It was radical Islamic terrorism. It was ISIS that has declared jihad, that is waging war on us,” the Texas senator said, referring to the Daesh Takfiri group, which was reportedly created and funded by the US and its regional allies to destabilize the Middle East region.

The twin blasts at Brussels Airport and another at a metro station close to the European Union headquarters in the Belgian capital left at least 34 people dead and 250 others wounded. Daesh has claimed responsibility for the attacks.

Cruz is currently second behind Donald Trump in the race for the Republican presidential nomination. The White House contender pointed to a former New York City police unit that targeted Muslims for surveillance as a model for his plan.

“New York City, under Mayor Bloomberg, had a program that focused on, worked proactively with Muslim communities to stop radicalization to prevent attacks from radical Islamic terrorism before they occur,” Cruz said.

“Now we know why everyone is calling Ted Cruz a liar,” said Monica Klein, a spokeswoman for the mayor.

And NYPD Commissioner William Bratton told CBS in an interview on Wednesday that Cruz has “no idea what the hell he’s talking about.”

« Corruption Has Been Identified But Not Tackled: Ghani
Taliban commander declare Jihad against the group’s supreme leader in Badghis »