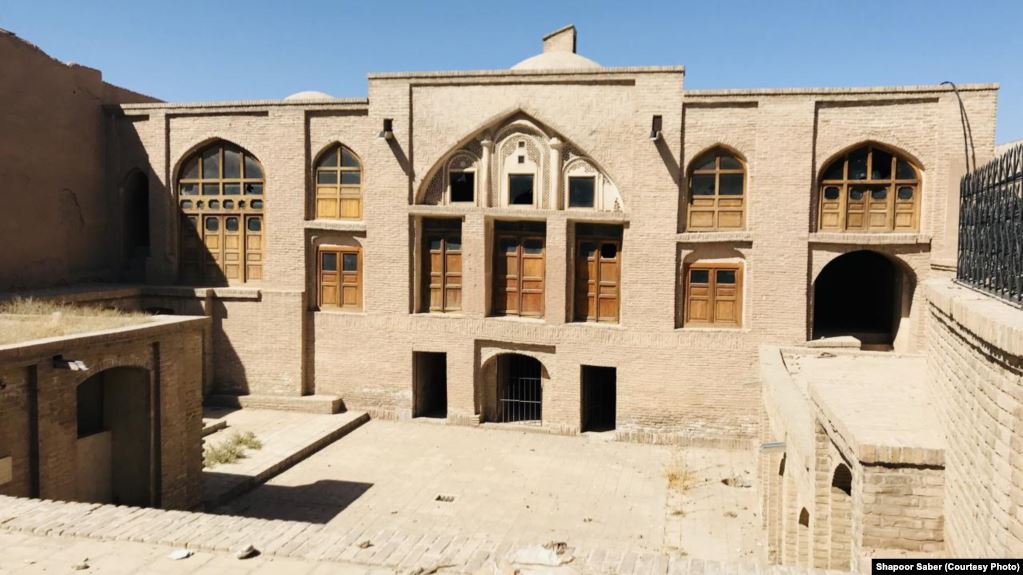 Yu Aw, the largest synagogue in Herat and the only synagogue to undergo proper preservation of its original characteristics, has been declared a historic site.

HERAT, — Afghanistan’s western province of Herat was once home to a thriving Jewish community that has now all but vanished from the region. Its monuments and properties have either fallen into disrepair or disappeared completely, and murky rules of tenure and stewardship of historical sites have left officials and residents arguing over their fate.

In the 18th and 19th centuries, Jews escaping religious persecution in Central Asia and Iran fled to Afghanistan, the only Muslim country where they could freely practice their faith. Mostly comprising middle-class traders and artisans, they lived in harmony with their Muslim neighbors for centuries.

But over the course of the 20th century, they left the country. Compelled by the search for a better life, many of Afghanistan’s Jews started moving to Israel and the United States in the 1940s after initially immigrating to British India.

“Muslim-Jewish relations were mostly tolerant and peaceful,” says Sara Aharon, a Jewish author whose father was born in Afghanistan. “There were 5,000 to 6,000 Jews in 20th-century Afghanistan, so there was no reason to feel threatened by the Jewish community.”

Most of the Jewish community had emigrated by the early 1980s before the outbreak of Afghanistan’s civil war. As the Jewish population continued to decline in Herat over the next few decades, their houses, synagogues, and other monuments were abandoned.

Several synagogues, a cemetery, and a bathhouse remain, according to Herat’s cultural officials. But existing regulations make it difficult to determine who owns or is responsible for the properties.

One Herat resident claims he is the owner of the public bathhouse. He says he had the 250-year-old property partially demolished.

Zalmai Safa, Herat’s director of historical monuments, says the man is the legal owner but was not given permission to tear down the site. “He wanted to acquire and reconstruct the bathhouse,” he told Radio Free Afghanistan. “But due to its antiquity, construction method, and significance to Herat’s Jewish history, we did not permit its demolition.”

The revolutions, large-scale displacement, and horrific violence of the past half-century have left a legacy of conflicts at all levels across Afghanistan. Disputes over land and property ownership are the most common kind of conflict between individuals and communities. The fact that Herat’s Jewish community left decades ago has encouraged some to take over the dilapidated communal properties.

Safa says these properties are relics of the Jewish community and have immense value for Afghans wishing to remember their legacy. His hope is for Afghans to preserve the remaining monuments so that they will exist for future generations as a testament to religious tolerance.

“These monuments are important because of their historic heritage. They showcase the tolerance our society had for the adherents of various faiths,” he noted. “It is our duty to preserve them for future generations just as our ancestors preserved them for us.”

Herat officials say that before they fled the country Jews transferred the ownership of synagogues, cemeteries, and other properties to the Afghan government. Others sold them outright.

Herat resident Younis, who like many Afghans goes by one name only, fondly remembers living next door to a Jewish family in the 1970s. He says in those days religious differences were never a topic of discussion.

“There were probably 70 to 80 Jewish families in the area we were living in. We had a good relationship with them,” he said. “We went to their shops, and they came to our homes. But then the revolution came, and everyone fled; they all moved to Israel,” he said of the last few families.

Gul Ahmad, another Herat resident, says Jewish history is a staple of Afghan history. “On one side lived the Jews; on the other side was us,” he said. “Both sides tolerated and respected each other. Our faith was never contentious between us, so it was not discussed,” he said.

Today, Jews travel to Herat’s old city to see where their ancestors lived for generations and what they left behind.

“Jewish families send their children to come back and visit these sites, to meet us and revisit their roots,” Ahmad said.

But many are afraid that the monuments are deteriorating due to neglect and without the proper care will erase the memory of a once-vibrant community.

The synagogues of Yu Aw, Mulla Ashur, Shamail, Golkia, and Georgia, the bathhouse, cemetery, and many mud dwellings are all hanging by a thread. In the old city, three out of the five remaining synagogues have undergone some sort of preservation. Yu Aw, the largest synagogue in Herat and the only synagogue to undergo proper preservation of its original characteristics, has been declared a historic site. Shamail was turned into a school after repairs.

The Mulla Ashur synagogue has remained in shambles without any repairs in sight because of the government’s lack of a restoration budget. And Golkia, a former place of worship for the Jewish community, has been turned into a mosque, though its architecture remains the same.

Some of the graves in the Jewish cemetery have been restored with financial assistance from the Jewish diaspora.

Like most Afghans and especially ethnic minorities in the country, Herat’s Jews were multilingual, speaking their own tongue along with the local language. They could read Hebrew and speak their version of Judeo-Persian, a dialect of the lingua franca of Afghanistan.

Homayoun Ahmadi, a cultural expert in Herat, stresses the need to rebuild and restore the remnants of the Jewish community in order to better attract foreign tourists.

“The existence of synagogues in Herat represents a degree of religious tolerance in Afghanistan,” he said. “It showcases that the Jews in Herat lived in harmony during many different periods in Afghanistan.”

Nilly Kohzad wrote this story based on reporting by Shapoor Saber.

4 thoughts on “The Struggle To Preserve Afghanistan’s Jewish Heritage”