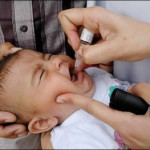 Xinhua: The Afghan government kicked off a five-day anti-polio vaccination campaign on Monday, a statement of the Public Health Ministry said. Aimed at vaccinating 6.1 million children under five, the campaign’s first phase will wrap up on Sept. 18 during which the doctors and thousands of volunteers would give the immunity doze against crippling virus to children in 20 out of the country’s 34 provinces, the statement added. The anti-polio drive was initially supposed to launch five months ago but has been delayed due to the COVID-19 outbreak. Click here to read more (external link).