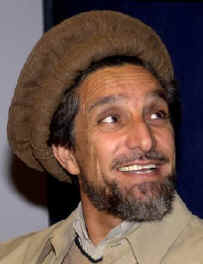 The city of Paris has inaugurated a pathway in the Champs-Elysees gardens named after the late Afghan resistance fighter and anti-Taliban leader Ahmad Shah Masud.

The inauguration ceremony on March 27 was attended by his son, Ahmad Masud, former Afghan President Hamid Karzai, and Abdullah Abdullah, the head of Afghanistan’s High Council for National Reconciliation.

Masud was killed by Al-Qaeda assassins just two days before the September 11, 2001, terrorist attacks in the United States.

Within a month, the United States invaded Afghanistan with the intention of overthrowing the Taliban and capturing Al-Qaeda leader Osama bin Laden.

A 1992 editorial in The Wall Street Journal described Masud as the “Afghan who won the Cold War.”

His native Panjshir Valley was a bastion of resistance to the 1979-89 Soviet invasion of Afghanistan.

Masud was also a key leader of the Northern Alliance, a combination of Afghanistan-based forces that aligned in 1996 to counter the Taliban’s takeover of Kabul.

Masud spoke some French, having studied at the French-language Lycee Esteqlal school in Kabul, and was admired in France. In 2001, French President Nicole Fontaine invited Masud to address the European Parliament.

Masud was also friends with French intellectual Bernard-Henri Levy, who visited Masud in the Panjshir Valley in the 1990s. Masud was known to have said that French President Charles De Gaulle was one of his political heroes.

« I sat through Chuck Lorre’s cringe new Afghan War sitcom in Kabul so you don’t have to
Rights watchdog survey finds 4.4 million Afghans live with a disability »